Well, I've got all the emergency lights charged up, which is a normal end-of-month thing.

I thought "hey, I haven't used the camp cookware at all this year; I should make sure nothing has gone wrong in there", and, well, about 100 L of water later, I have the remnants of the Sea Suds out of the dry bag that holds the camp cookware, and am considering what to do with the rest of said soap, since sitting in Sea Suds seems to have pitted the aluminium pot.  Somewhere in there the dry bag fell over in the sink and managed to inundate the counter top and the floor and generally make Aoife go hide, but, hey, the kitchen floor could well have used that mopping.

I have at least some employment next year; I got into the home bike mechanic's course I wanted to take in February, there's an actual frame with my name on it and I sent in my final decision on paint colour today.   My computer died the death (that very distinctive motherboard capacitor pop) on the 22nd of December, and I was -- not without some budget flailing, but I was -- able to replace its innards with parts that weren't 4.5 years old.  It's fast again.

I'm warm, I have food, I have work, I'm not bored, and this seems overwhelmingly likely to continue for the foreseeable, so things are pretty good.

Didn't get anything like as much birding done this fall as I would have liked; that work-life balance thing wasn't, and I need to get better at that.  But I did get in some, and have seen my first California Gull, Tufted Titmouse, and Northern Pintail Duck.  And the new-this-year big scope works a treat for distant roosting gulls.

Photography, also not so much.  Part of that is the interesting plateau after "this is cool" where one realizes one completely sucks at this.  In this particular case I have no idea how to stop sucking at it -- aside from heaps of undirected practice -- so there has been less.  One tentative New Year's plan is to try to fix that by buying a K5, which is irrational but might work anyway.

Really quiet week off; pretty much caught up on sleep.    (see also, balance, work, life, not, above.)  Few but very welcome social interactions.

In the spirit of the season 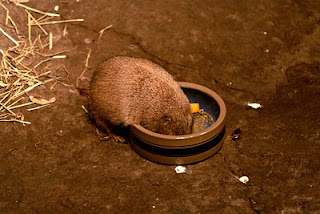 One of the zoo's prairie dogs, sound asleep in its food dish. (Obviously breathing, and didn't budge between going past one way and coming back the other, ten or so minutes later.) 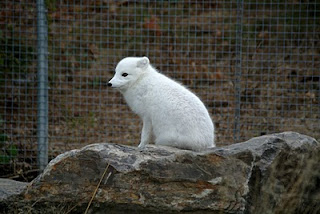 You have to look at the full size image to get the mad yellow eyes.
Arctic fox at the metro zoo; I'm pleased with getting detail out of the fur and the rock in the this one, and while I wish from a visual perspective that fence wasn't there I should never had taken the picture without it, because a wild arctic fox would never let me half that close.  So, heh, everything is trade-offs.
Posted by Graydon at 14:44 1 comments 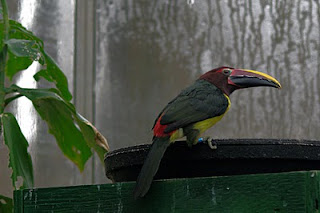 Well, no, probably not; it's some sort of toucan, possibly an aracari, but which aracari is beyond my ken.

I presume it's a temporary visitor to the Americans pavillion free-flight bird room (familiar to parents as the place to go play "spot the mot-mot") because it's not on the sign.
Posted by Graydon at 14:07 0 comments