The purpose of the system…

So there's this simple graph: 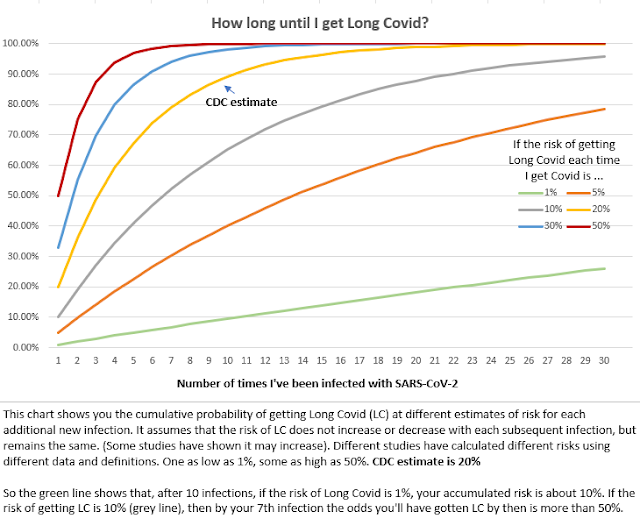 We don't know what's "long COVID"—not being able to clear the disease and having flare ups due to viral reservoirs—and what's lasting damage.  This is something we'd need years more data about, and we're all trapped in this horror movie before we know anything much.  We are now pretty sure that COVID is cumulative—having it this time makes having it next time more likely and worse—so the graph above is indefensibly optimistic in using constant odds.  Current circulating varieties have a lot of immune escape and are certainly infectious before people become symptomatic, so for planning purposes, everyone is infected. (Get an elastomeric respirator; get P100 cartridges for it; wear it continuously outside your dwelling. Try to live.)

You'd think this would be creating much more concern than the initial outbreak; we now know a lot more about how bad it is, and this is really notably bad.  A severe disease that doesn't create lasting immunity, which spreads prior to symptoms (so there's no selection pressure not to kill you), which causes loss of immune function, and which is easy to catch (to undersell the spreadingest disease in human history), is not something we've got a precedent for or much in the way of robust narratives. (Plus we move it around, and the outcomes for diseases with long-distance travel are different.)

So where's the concern?

Everyone making decisions with the civil power wants the world to be less complicated.

Whether that's because they really don't like having to pick success instead of control, because they don't care who dies as long as their profit numbers look good, because they're old and haven't got the mental flexibility anymore (gerontocracy is not good at sudden change), or because they actively want to forcibly simplify society until their slave-holding desires are something society cannot readily suppress doesn't really matter on the observational scale.  What matters is that there's a systemic failure; the people making the decisions want the world to be simple and aren't willing to live in a world that is not.  If they can only sacrifice enough of us, they'll get their wish; the world will be a lot simpler.

(No, China does not then win by default.  Global economic collapse doesn't do anything good for China and then they've got the same agricultural failure to worry about everyone else has got.  It's really past time to switch the narrative from man-versus-man to man-versus-past-mistakes.)

Just got a 3M half mask and P100 filters on the weekend. Took it out for its first spin in public (grocery store, library) earlier today. Everybody did the polite thing and ignored me - except for a kid (6 years old, maybe?) who asked his mother "Why is that man wearing that mask?" I didn't tarry to hear her answer. Just waved at the kid.

I know it can't give me the simple pleasure of sitting in a library, drinking a coffee and reading a book. Because the mask is useless if I don't wear it. I wish those days still existed. But those halcyon days are not coming back, are they?

Still, I felt a bit less on edge while I was in the store and library. Even with my previous N95 face mask I was starting to get leery of public indoor settings.

Glad to hear it!

Hope you got a couple changes of filter, too; the reliability of supply is starting to wobble again.

And nope, not returning.

The mask is from 3M, but bought it from a 3rd party vendor. So the seal is OK when I'm breathing out (mask bulges when I block the exit valve), but leaks like a sieve when I block the input valves.

At least people in my age group get to have shots starting tomorrow. Which is Bastille Day. Vive la France!

If you take a look at https://www.internationalsafety.com/product-categories/respiratory-breathing-protection

All the manufacturers seem to have at least one no-exhaust valve, speaking-diaphragm, "speech-enhanced", or otherwise "this is a COVID mask" option.

And yeah, fit is a trick. But don't give up! We're going to be dealing with this for awhile.

"having it this time makes having it next time more likely and worse" - from what do you conclude this. This sounds rather un-scientifically. Same like taking a simplified pre-preprint picture from Twitter...

The diagram is to get people thinking about odds and risk; it's not what is happening, it's "this kind of risk looks like this, here's a visualization aide".

Which should be understood to be the most conservative view it's possible to take of the evidence without outright falsehood.

e.g., https://www.researchsquare.com/article/rs-1749502/v1 does not say "may increse", it says assessment of the cumulative risks of repeated infection showed that the risk and burden increased in a graded fashion according to the number of infections.

This is far, far past the point a great deal of precautionary principle should come into play.

I have already seen that second preprint, publish in an irrelevant paper. At least, they have a statistical correction, which isn't available for the Ontario rapid review ("A limitation of this rapid review is that symptoms, conditions, and levels of function at baseline or before SARS-CoV-2 infection were often unknown.") So the PACS-Study might just show the obvious: those who got more symptoms or more infections just have a worse health condition. They need to control for that covariate. If not, their study is useless.

If you read the Research Square preprint, you'll see they at least tried to control for some immune system strenght related factors. But the say also "The cohorts of people with 1, 2, 3 or more infections included those that had a positive test for SARS-CoV-2 and did not include those who may have had an infection with SARS-CoV-2 but were not tested, if present in large numbers this may have resulted in misclassification of exposure." There several reason why you would except a large number of asymptomatic and mild courses not detected as reinfection. It is impossible to control for non-available data. As I can tell you for european countries: the estimated number of unreported and undetected cases (dark figure) has increased a lot over time. (Or there is something like herd immunity existing, that would be another explanation: for the decline of cases while societies were widely opened again allowing the virus to spread effectivly freely. Check out denmark, although they had massive spread in february this year, the rise of infection rate already stopped at 35% total infection in the whole country(2) ending at about 55%. Same for Portugal (4), germany (5) and probably a lot more states.)

Another reason for a high dark figure is the positivity rate (number of conducted tests having a positive result / total number), which is for example very high in Germany right now, at about 20%. There are also incentives not to report illness or a positive self test, which are even more relevant for the US, as they are having a worse social security system, and non-reporting is incited so you don't loose money or your job.

Overall I just can say: Before there is not a convincing theory about why the immune system should work totally different this time (compared to all other pandemics and epidemics before), I wouldn't spread such badly scientifically-underpinned horror stories.

(5) Germany is right now having a lot of big events, nearly no one wears masks there. (aka spreading freely) But the peak seems already reached at a total infection rate of 36,24% (as of Juli 21 2022), while having a much worse vaccination rate than the other two countries.

I would commend https://www.nature.com/articles/s41392-022-00919-x to your attention. There's a convincing mechanism for why the immune system should work differently this time. As the nice folks at Public Health noted, the evidence that SARS-CoV-2 can cause immune dysregulation is increasing.

(Plus the less-well-understood immune escape mechanism or mechanisms. We can certainly observe that this is a thing which happens, though precisely how is not well understood.)

I would also suggest that "mild" in terms of symptoms is a taxonomic error; the folks looking at mortality outcomes in a context of vaccine effectiveness have started looking at six months from infection, rather than after the acute phase of the infection. The idea that if your acute COVID symptoms were mild you can expect to be basically OK is not well-supported.