So, I've been developing this bad habit of bending chain rings, to the point where I began to suspect the cranks, or, rather, that one of the arms of the spider was out of flat a bit, and Not Helping in consequence.

Getting 180mm cranks involves a substantial wait for things to be put on a boat; given that, throwing money at the problem means there's no difference between 180 and the 195 various proportional-crank advocates say I (or, rather, someone with my leg length) should use.

Everything I've seen suggests crank length has nothing to do with total power output (at least over short periods of time); that is entirely about pedal velocity.  I am hoping the larger circle will lead to less fatigue, since I'll get more time per unit of pedal distance in terms of muscle recovery.

They showed up, due to High Sierra having a bunch of supplier problems involving spiders, on the 29th of August.

With one arm of the spider poking out of the box; it looked a bit scuffed, but otherwise intact, so I was an idiot and didn't think anything of it or try to complain to the post office. 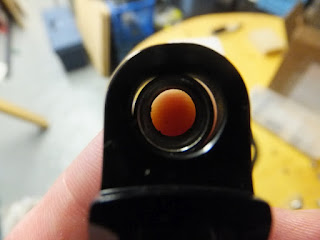 The spider arm as was poking out of the box?  Its chainring bolt hole was just a bit out of round as it arrived.

So back the whole thing goes, where it shall presumptively get a new spider.

This, on the other hand, is managing to fit the third water bottle cage with 35mm tyres and SKS longboard fenders, which took me three tries and a lot of fussing. 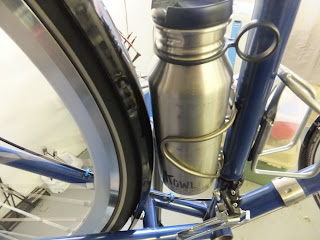 But it makes me happy, because it's surprisingly easy to need bottle number three.
Posted by Graydon at 11:20