First ride for the Rickshaw 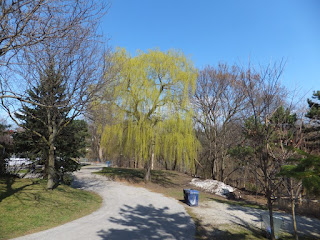 This is what one might describe as a landscape about a month ahead of itself.  (That mass of dirty snow is from the rink out of frame to the left; we didn't get that much snow on the ground at any time all winter this year.) 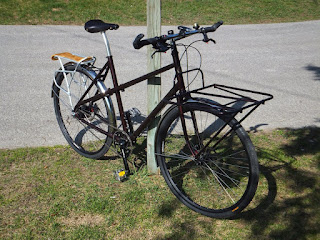 The Rickshaw, viewed from off the starboard bow. 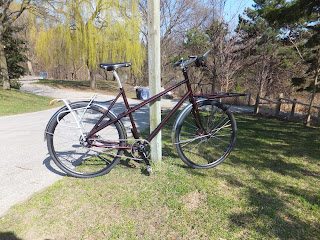 And off the starboard beam.

That Axiom rack I still think is very pretty, but it's out of production for an obvious reason after I went to put it on the bike; one has to dismount the deck and then get creative.

I still need the non-temporary summer tires, to figure out which of the possible water bottle mounts works with the locks in the lock holders, to add some kind of decking for the front rack (I am less and less thinking that a slab of plywood is a good idea; it seems very likely there will be far too many angles from which that's just a sail), and the thud-buster seatpost.  Got in a very pleasant and uneventful 12km test ride, all the same; the Alfine 8-speed hub is making me think of putting a Rohloff on the Experiment (not very hard, but the silence, the shifting, and the shifting while stopped has much to recommend it), and while the overall directional stability isn't as good as the Experiment (meaning that the front end shakes if I try the "shift track to one side at speed by swinging my legs" trick, rather than behaving as though there are rails in the road) it's pretty good in an absolute sense.

Oh, and to find the actual Berthoud klik-fix mounts for the seat; there are two of them around here somewhere, and I went and put them in a Safe Place.
Posted by Graydon at 16:57

You might be better off just finding a large shallow wire basket (or bread cooling rack) for the front rack; they don't act quite so much as sails, and they're (generally) cheap enough so that you can treat them as a sacrificial item and swap them out every couple of years.

Thanks, that's a very useful suggestion. (Plus it might simplify the whole cat-lid part of the project, too.)