A modest lapse in forethought and planning

I managed to lose a Tubus rack stay through the floor some time ago (rolled under the skirting board, and instead of a minor bit of ragged edge in the flooring and then solid subfloor, there was a hole. I'm still moderately appalled about that hole). So I ordered a replacement via MBS Tandems, who are the local-for-at-least-Ontario values of local Tubus dealer, and can make good on Tubus' policy of making every single part for every rack they sell individually available.
So I thought I should try to cycle up there when the part came in; it was supposed to be the Saturday after the Niagara trip, so it would be a good "keep going at least moderate distances" ride.  Then the Niagara trip didn't happen due to getting hit by a car, and then I didn't get on the bike again for two weeks due to lead times for rim replacement, wheel building, the inescapable interference of work, and necessary maintenance.  ("What is with this nigh-subliminal new-front-wheel wobble? not fender scrub, not the brakes, it's square in the dropouts, not... *ping* goes the front skewer when I elect to see if a bit of tightening will help.  Entirely the sort of thing that is infinitely better to discover on a repair stand than when riding, and I was highly reassured because when I rode the Experiment with rebuilt front wheel back from the LBS something hadn't sounded quite right, and now I had found it.  But there's a certain inescapable delay if one does not stock skewers in the parts kit, which I had not been.  I'm pretty sure the car was the last straw for the skewer; there was a little bit of kink and it didn't go where the nut was.  The SON28 hub continues working without complaint, so I am now officially impressed by their toughness and durability.)

Google said it was about 75km; I thought I about it and figured, that will hurt a bit, but I can do that, and Zingerella was willing to come along, so if I did wind up lying in a ditch somewhere in a state of collapse, there would be someone available to call 911. 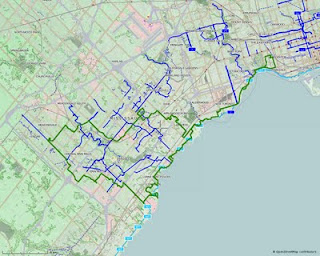 Only it turned out to be about not quite 98 km due to routing issues (a combination of "never been there before", "Waterfront Trail signage requires arcane knowledge", and "bicycle relevant traffic stats are hard to come by; perhaps we should go another way, here?").  On what was, I must acknowledge, a really nice day; sunny, usefully (meaning "cooling" and "not actually a headwind") breezy, and relatively low traffic.  (Turns out I drink water at 60ml/km on a nice sunny day, something to keep in mind for the future.) 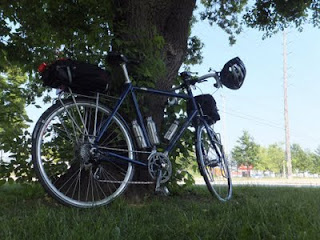 The Experiment leaning on a tree in Suncor Park, where I elected to stop for a bit and see if lying on the nice cool shady grass would induce my left leg to stop cramping.  (It eventually mostly did, though coming back happened at a much slower rate of advance that going to had done.)

It wasn't Niagara; the time/speed graph looks like seismograph output, courtesy of numerous stop signs, stop lights, and etc.  But it does reassure me that 100km days are doable, and as new-front-wheel tests go, it seems reasonably definitive.

I may need an under-helmet cap of some kind to keep the sun off; my scalp is feeling just a bit scorched this morning.  And the Specialized gloves aren't as sunblocky as I should best prefer, either, but everything else seems to work just fine.  (Though I am going to have to find a way to make something that's quick-energy food (the lead time on the pickup from the mixed nuts seems to be about an hour, which presents timing challenges) and remember to take some, next time I go for that kind of length.)  Zingerella (who has a touring weekend coming up well before I do) managed 16 additional km, what with starting rather distant from my domicile, and both she and the TPB held up better than I did.
Posted by Graydon at 11:51

Not sure if you have any dietary restrictions/contraindications. But you can make Larabar-type snacks pretty easily.

Thanks! I had never heard of those.