It's amazing how long 45 km can seem 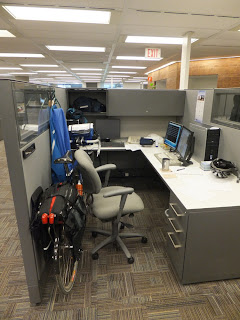 Managed to ride to work without getting direly lost, squashed, or collapsing in a heap, and I learning something—Google doesn't want to route cyclists going north onto Old Yonge St. for the good and excellent reason that it's a bit steep, and has really inconvenient stop signs.  Google also thinks McGlashan Road is a through street west of Yonge, and it isn't, and that was exciting; the handlebars are pointing a little right of the midline; getting into the highest gear leads to chain hop, which I suspect can be cured by tweaking some rear derailleur settings, and a 20km ride in sub-10℃ weather has me going through about a litre of water.  Oh, and the attempt to wrap the water bottles in self-adhering silicone tape is a success, in that they don't scrape on the bottle cages and are in there good and snug, and not a success in that the silicone tape remains willing to bond with itself and attracts dust and grit with amazing thoroughness.

Never been riding on most of those roads; found myself riding through a cemetery (nice ride, though there are ridge issues) and a rail trail (splendid) I had no idea existed before I started looking for a to-work route, so that's something.

Will be looking at a less road route, if I can; route-finding for a new route notwithstanding, all the stop signs keep the average speed low and the cars are mostly polite but it only takes one.

But, hey, I made it, the Experiment fits in my new cube, and if I manage to do enough of this in May riding around Niagara in early June will be more fun and less hurty.
Posted by Graydon at 22:23