Attempting to learn something

Last weekend I went to Guelph to take a weekend Park Tool School course from Winterborne Bicycle Services, without knowing all that much about what would be involved.

As it turned out, what's involved is an absolute minimum of theory (mostly of the "threads are left or right handed" sort), then taking everything (except the seat) off a mountain bike sort of bicycle and putting it all back on again.  No changing of inner tubes (on the theory that anyone taking the course could do that already; I suspect the seat falls half into "you clamp the bike by the seat tube" and half into "yeah, if you're here, you can do that") but we took shifters, brakes, derailleurs, wheels, fork, cranks, and even one of the headset cups off the frame and put it all back on again, re-stringing and resetting everything that uses cables in the process.

I found this really useful in a "OK, now I've done that" way; working a class bike was also a big emotional help, of the form "well, dozens of other people have managed not to break it, just how hard can this be?"

Major side effects seem to include a determination to get a better variety of greases ("if it has threads, grease it; if it doesn't have threads, clean it" was something of a mantra) and some torque wrenches (I don't have anything carbon, but I certainly do have the "stainless bolt in soft aluminium threads" case).  I might also go back and take the wheel-building course, time permitting.  (I have no intention of getting extensively into building wheels, but I'm hard on wheels, and I want to understand them.)  I'm also going  to have a better idea of what kinds of things I should have in a spare parts kit while touring.

The instructors (Rick and Jay) did a good job of being thorough while remaining low-key and non-threatening to a class (12; larger than they usually run) with a very broad range of experience and ability.  I was especially impressed with the straight-pull caliper brake setting (there is a consistent way to do it!) and Rick's story about greasing replacement brake cable with sunscreen while touring in Africa.

Oh, and I've got the Park Tool Big Blue Book of Bicycle Repair, which is certainly blue, not plausibly big, and looks to be very, very useful in future. 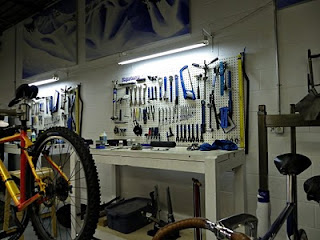 You should build some wheels; it's surprisingly easy to do. The first wheel I ever built was a dynohub wheel for my rando bike, and it took me about a hour to assemble and true it (with the assistance of Sheldon Brown [RIP]'s website.)

A drivewheel might be more difficult because ofthe dish, but if you're even slightly comfortable with doing routine maintenance on a wheel it's not much of a stretch at all to just build them.

Wheel building is unquestionably on the list, but it also tends to sink into the swamp of my ignorance pretty quickly; there's a lot of minutia to wheels, and I know effectively none of it. I've read Sheldon's pages on the subject, but that isn't the same thing.

The actual traumatic experience is being miles from anywhere with a snapped spoke and a rear wheel going slowly more and more out of true; I had no idea how to deal with that, and I'd like to.

The actual problem was stock Giant LX Cypress wheels, which were just not up to my weight. I fixed that by going to the LBS and saying "really strong wheels, please" and those wheels have outlasted that frame and show no signs (avert!) of trouble as yet.

The experiment (which I ought to be picking up on Friday) will have considerably stronger and rather more custom wheels with -- and this was a motivation for getting it -- a symmetric rear wheel on a 40 hole hub. That really ought to be strong enough.

So the other part of attempting wheel building is that I don't think I'm going to be able to produce the wheels I'm riding on for a first try; I'm not sure about a fifth try. And it'll be fairly expensive to make the attempt. So I kinda want to put it off until I can either go for instruction or have (space for) a bench or both.

there are a couple of things you can do if you want to be paranoid about the wheels you build; you can start by scrounging a junker wheel from a local bike shop, taking it apart, then sitting down with Sheldon Brown's website and putting it back together. One thing I did before building up an actual wheel was to sit down with a pile of misfitting pieces (700c rim, hub from a tubular wheel I found in a junkpile, and a handful of galvanized spokes I pulled off a 27" wheel I found in _another_ junkpile) and walked through the process of assembling the spokes. I didn't end up with a wheel or anything (spokes for 27" wheels are quite a bit larger than spokes for 700c, and I wasn't particularly fussy about tiny details about the hub spoke diameter) but it did give me a feel for how to thread the spokes together.

And, alternatively, you can take a spare wheel apart, then reassemble it (that's pretty much what I did with the dynohub wheel) and ride it around on short loops to see if it lunges out of true.

Much envy to you on being able to take a course like that. I just came in from swapping the brake pads on my commuter bike. Chain is cleaning as we speak.

Wheel building/spoke repair is a closed book to me. I've recently found a new bike shop where they seem to be both amiable and helpful. I may see if I can pay them to teach me about wheels. I can wing it on a lot of things, but not wheels, alas.

Orc -- that's good advice. Toronto doesn't actually have bicycle junkpiles that I know about but I can always ask the LBS if they have a deader or two. Or just buy a spare for the town bike.

Janice -- my LBS (Cycle Solutions on Parliament St.) is really good, and I'm fortunate to have them.

There are supposed to be Park Tool Schools all over the place; whether it's "change a tire, buy stuff!" or an actual good course like the Winterborne one is very much something to check ahead of time, but there might be something similar local(ish) to you.

The Community Bicycle Network, who hosted the Wenches with Wrenches course I took (for which course I should probably consider becoming an instructor) might be a good source for inexpensive scrounged wheel parts.