Rather than giving the (fairly lengthy) list of birds for the May 1st TOC bird walk in High Park, I'm going to note highlights.

Which for birds observed was definitely the cerulean warbler; all 40+ people on the walk managed to see it, too, despite its best efforts involving not holding still and occupying the upper parts of the canopy of large oak trees.  (The cerulean warbler is small, scarce, very pretty, and even when it is there and you can hear it calling, it's 20m up in a tree, so actually seeing one is something of a treat.  It was a life bird for a number of people.)

Other interesting birds (for me, anyway); blue-headed vireo, black-throated blue warbler, barn swallows, and chimney swifts; it's always a relief to me when I feel I can identify swifts and swallows in flight, and male black-throated blue are very pretty. 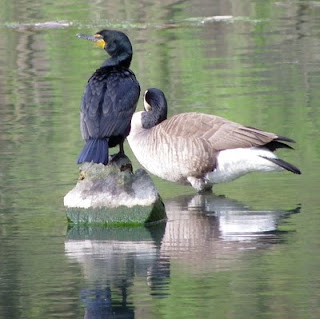 The cormorant, for reasons I do not profess to comprehend, is the PDML's totem bird. So here's a double-crested in excellent breeding plumage. 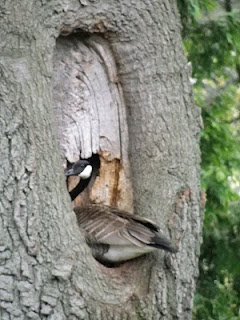 Canada geese are successful because they're not fussy; they'll eat almost anything and they're not over-particular about where they nest. This is the first case of cavity-nesting geese I've ever seen, though. 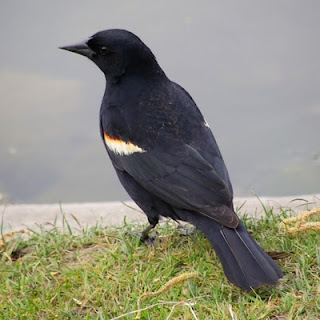 The X90 has its limits, but it can get good feather detail from a red-winged black bird, which is doing fairly well. 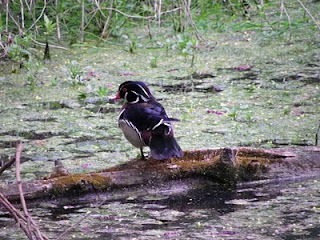 On the other hand, a male wood duck appears to completely defeat the X90's colour balancing algorithm; this is why one wants a camera that takes raw images.

It was a good walk and the rain even held off until we were more or less done.

Next Saturday is supposed to be cold, wet, and windy, so if the forecast holds I will not be taking the camera on that one.  Since Lambton woods is supposed to be mostly warblers in any case, my odds of getting a useful picture would be poor.
Posted by Graydon at 22:26