The official start time, at the observation platform for Oshawa Second Marsh, was 09h00. Tyler Hoar, the walk leader, had suggested that reliable presence of little gulls could not be guaranteed past about 08h00 due to the presence of a peregrine falcon. So I got there, courtesy of a fellow TOC member with a kind streak and a car, by a little after 07h00.

Tyler, a dedicated soul, had been at the observation platform since dawn.

We had an amazing day; sunny, warm (for April; 16 C eventually), and almost completely still. Large portions of the marsh were so flat they looked like ice, and the reflections of flying birds rose up from the depths to meet them at the surface of the water.

Little Gulls are the world's smallest gull, and were unknown in North America prior to 1962, in which year they made a nesting attempt in Oshawa's Second Marsh. There is now a small population—the largest, wildly optimistic estimate for which is 400 individuals—in in North America, and while it doesn't breed in the marsh, the migration route continues to include the marsh. (I am sure this is interesting to people studying migration route formation.) Getting to see a group of them, especially in company with Bonaparte's Gulls (another black-headed "small gull"), and to observe both courting flights and hawking flights (there's a major midge-hatching event going on in Lake Ontario right now) was a very welcome experience. Little Gulls have a dark underwing, varying from charcoal to jet black in colour, but with a white trailing edge to the wing. This is very distinctive, and I have some hope of recognizing a Little Gull should I see one again. (I also now know in a way that is attached to mental images how the difference in wing length effects how the sitting bird looks; Little Gulls have wings to short to cross when folded, so the black wing tips of Bonaparte's gulls show over their backs when folded and the wing tips of Little Gulls aren't long enough to do that.)

Aside from the 34 Little Gulls, there were the obligatory red-winged black birds, including an anomalous pied individual with a blush-orange throat; something more than 1200 Bonaparte's Gulls; common merganser, wood duck, common grackles, a single Caspian turn bob-preening in the midst of the sitting Little Gulls; it's quite a mental shock to see a tern larger than the gulls around it), shoveller ducks, gadwall, greenwing teal, piebilled grebe (lurking just past the edge of the dead reeds and often completely obscured by them), a small flock of bluejays flying north, a pair of overflying meadowlarks in breeding plumage leaving behind them an impression of a remarkable intensity of yellow, a single second year great-blacked-backed gull in with the herring gulls, overflying common loons, a yellowlegs of indeterminate size (since it circled at great speed and vanished downward behind us; very hard to detect the fine distinctions between Greater and Lesser under those circumstances), mute swan, trumpeter swan, chickadee, and tree swallows. 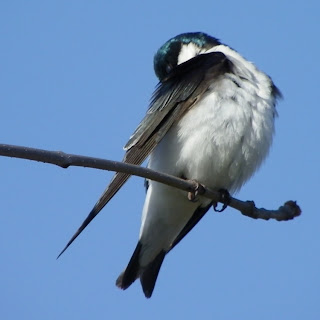 After climbing off the platform to look for the yellowlegs, I concluded that the platform was pretty full now and I'd make a try for pictures of the tree swallows; I have a sneaking visual fondness for them, and this one was co-operating by sitting somewhere with a complete lack of confusing background objects. (There's a way to get the X90 to use only the centre focus spot and I need to read the manual again and find out what it is.)

Once it was actually nine o'clock and everyone had arrived—something very much like 30 people, a good turnout even on a lovely day—we set out to walk around the marsh. This is a fair hike, and goes along Lake Ontario beach for about a third of its length before coming back through trails and paved road through the conservation area.

The walk was sparser than the platform; early spring or not (many trees are in full leaf, if not quite fully deployed leaf) the migrants are not all in early. (Those coming from the Souther US are noticing the warmer weather and leaving early; those coming from the Southern Hemisphere have no bird postal system to tell them NorAm's having an early and warm spring, and don't know they could leave early, is how I have heard this explained. This is probably bad in terms of bug availability for feeding nestlings, but I hope not.)

Despite my complaints of sparser, I did see ruby-crowned kinglet, with the red crest feathers actively displayed; yellow-rumped warbler, brown-headed cowbird, goldfinch, palm warbler, darkeyed junco, and a phoebe in the wooded portion of the walk, and redheaded duck, ruddy duck, hermit thrush, a yellow-shafted northern flicker, greater scaup, lesser scaup, common loon, gadwall, red-throated merganser, long-tailed duck, and common merganser on the lake, a cooper's hawk, American crow, and killdeer on the beach-and-marsh-edge portions of the walk. 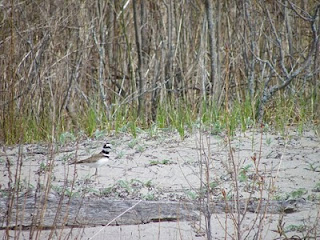 Coming back towards the parking lot (and crossing a long stretch of what is plausibly lawn, behind the GM Canada headquarters), I was pleased to see a song sparrow acting like a female red-winged black bird in a reed-filled ditch.

I gave up around 12h45, which felt a lot later than that. Tomorrow is a walk for early migrants out Tommy Thompson Park, and while that is much easier to get to, the forecast weather can be summarized neatly as "rain, with wind". I can hope this will lead to many migrants huddled sullenly on trees and readily observed, but I'm not sure that's really the way to bet.