Generally speaking, pictures of birds that get out in the world are good pictures of birds.
The problem with this is that it greatly misleads; sparrows actually look like the top image, thus: 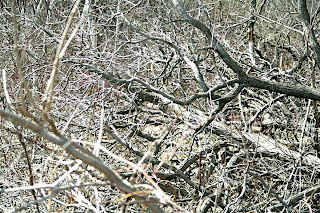 Images like the two below, the rough equivalent of 12 power binoculars, are what you get after throwing out the even worse ones, post processing, and tossing—even with the x12 effect—almost all the pixels as not containing bird. 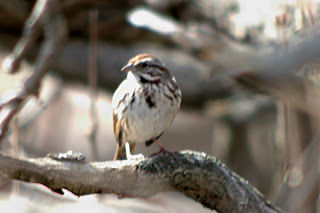 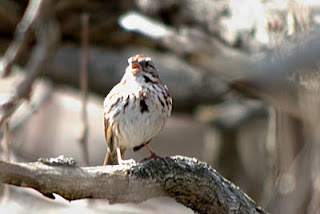 It's good enough tell that it's a song sparrow, and it was singing in a territorial way on the 27th of March.  So were the red-winged black birds, but I could not find an angle through the thicket such that there was more bird than stick in the image.

When I was a kid, living on a farm under a section of St. Lawrence flyway, spring was great skeins of Canada geese honking their way across the sky.  That doesn't work so well in a time when the Canada geese are happily urbanizing and don't all migrate.

Hearing sparrows going territorial, and even more so the red-winged black birds, does mean spring, though.  I wouldn't normally expect this of late March, but the natural world has clearly made up its mind on the point.
Posted by Graydon at 20:33

Is the top image a sample of forest, or is there actually a bird in it somewhere?

The sparrow in the lower two pictures is just about dead centre in the first picture.

Look for the dark breast spot and the shape of the head, which is turned in profile to the left. (Bird's right.)