Sometime this spring, the Great Horned Owl display at the Metro Zoo stopped having an owl in it. It then grew a lot more herbage than it customarily did, over the course of the summer. (I don't know what happened to the owl; it's been in there long enough that it might well have died of its age.)
I was wondering what they were going to do with the enclosure because it's more or less part of the exterior structure of the Americas pavilion; it'd be rather challenging to do much with, and even more challenging to avoid inadvertent draining of the otter pool, to which the owl enclosure is adjacent, while one did the something. And while the prospect of the Great Otter Chase of 2008 is amusing in imagination, I'm pretty sure the folks at the zoo want no such thing to arise.

The enclosure with the Saw Whet owl of the vexed focus challenges is adjacent to the beaver pool, which is the other side of the otter pool; this enclosure is the one to the left of the otter pool if you're looking at it from outside.

So today there was a new, hand-lettered, sign, over the "Great Horned Owl" sign that's been there this many a long year. 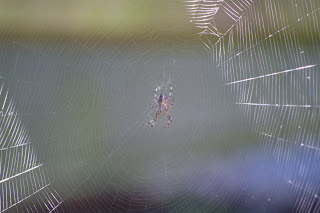 Which sign had nothing to do with this, most obvious, occupant; this I suppose to be a cob spider, and the web, and the spider, were both much easier to notice than the new incumbent. 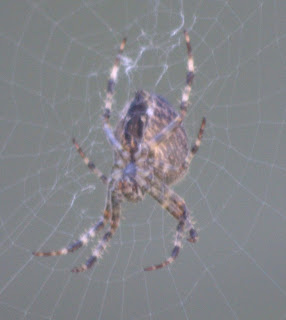 Not bad for hand held through spiral mesh; one can tell that spiders tend to be a bit spiky in their fine details.

The sign said "Snow Owl", and after some peering about, I did indeed spot this (probably young) snowy owl. 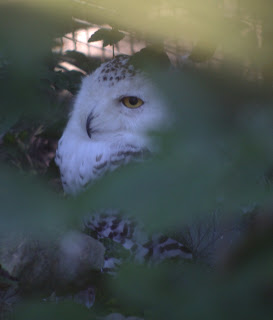 Which certainly solves the "needs a creature that doesn't mind staying out in the winter" problem which comes with that enclosure. And snowies aren't much for tree perching—a difficult habit to acquire on the tundra!—so the ground location makes lots of sense.
It does violate a whole bunch of iconic images, though. Green leaves don't go with snowy owls, those devourers of lemmings.