A certain awkwardness with gulls

Not any sort of physical fear of them; however many drowned corpses of mankind gulls have helped to devour over the years, it's not like any gull is going to try the initial drowning step unassisted. 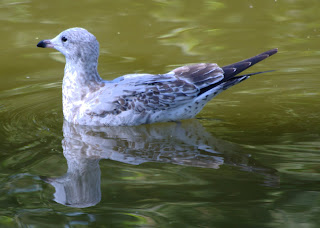 However, figuring out what kind of gull something is, well. It's worse than warblers.
I think, based on the dark eye, the greyish pink of the bill, and the not particularly black primaries, this is an immature mew gull; if one was going to see one in Toronto, fall migration would be the time. But I wouldn't bet anything on this identification what so ever.