The importance of selecting achievable objectives

Our World in Data will give you a graph; I think that link takes you to the current version of: 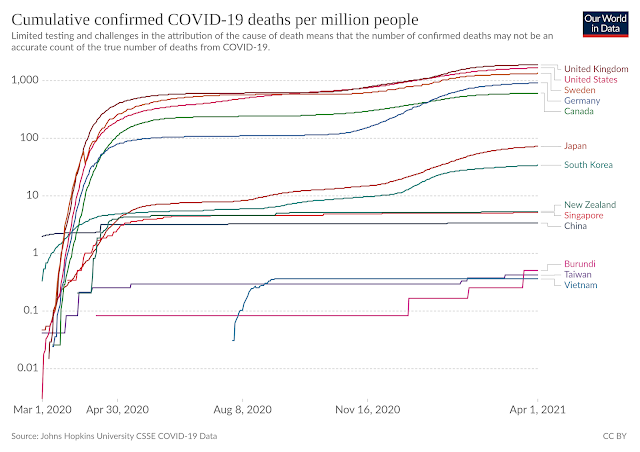 Oddly enough, Blogger can't cope with SVG, so pardon the grainy PNG. (Opening in a new tab may help; the original image is large, and might get better scaling that way.)

I think it's an absolute no-brainer that trying for cost minimization was and is a mistake.  I think it's painfully obvious that the good people of Canada have no possibility of getting any approximation of good government -- in this context, definitionally one attempting to extirpate the disease, rather than trying to minimize the cost of the disease to select segments of society -- and we haven't got effective public health mechanisms with respect to the pandemic, because various provincial governments just flatly refuse to even consider funding them.

And now we're looking at an act of public optimism in Canada -- that delaying second doses of vaccines will provide effective long-term protection, because surely the first dose protective effect will have some sort of linear decay -- rather than, you know, doing what we  know works to extirpate the disease, because the rot runs deep and literally no one in a position of power is capable of picking an objective that's not measured in money.  The countries in the extirpation groups did it without a vaccine; a vaccine is extremely helpful, especially for health care workers, but you don't actually require one.

Figuring out how to stop being a failed petrostate isn't going to be cheap.  Figuring out how to decarbonise and keep feeding everybody is going to be hard, never mind "not cheap".  COVID is pretty much easy mode compared to either of those, and what claims to be good government has entirely failed; it's failed so hard it shows no sign of noticing it's failed, or that success was an option.

It leaves me fearful and sad.  We're going to have to do so much better than this.

Taiwan and Vietnam are interesting, they're both heavily trade-based countries and Vietnam has long, porous borders. But as you say, they both have "holy fuck this is bad we should prevent it killing us all" responses rather than the other option.

I am somewhat hopeful that the next few months will see the US act, that infrastructure bill might be the stupid that breaks the democrat-in-name-only deadlock and kills the filibuster. Once the US goes there's some hope that you lot will benefit too.

I'm also somewhat looking at the climate catastrophe responses across the world, while re-reading KSR's 2312 and thinking that effective global action apparently requires more than just a pandemic. Based on covid I suspect we're going to see hundreds of millions dead globally and tens of millions in the USA before they decide that a response is needed, with the global community following suit a decade or two later.

Right now some fukstayns in Aotearoa are arguing that since the current goal is all car electric by 2050 that no action on that issue should be taken now, after all few cars last 30 years so what's being sold now will be off the road by then anyway. Repeat for every other change required to achieve "net zero by 2050". I think I shall go outside and plant some more trees.

My take on Taiwan and Vietnam is that the Taiwanese have (just barely) living-memory apocalyptic military struggle and (solidly) living-memory collective political struggle informing their public sphere, and the Vietnamese have living-memory apocalyptic military struggle doing the same for their public sphere, on the one hand, and that both have East Asian model "this is very important" education systems that due to the living-memory stuff and the national goals of engineering excellence teach facts, on the other. So they're doing a good job of having public policy that's reasonably consensus driven AND they had a quantified "if pandemic, do the following..." plan in place.

I did like the a-year-ago comment attributed to a Vietnamese senior party official to the effect that they have a very similar form of government to the PRC and that this inclined them to assume that the outbreak in Wuhan was much worse than the official statements were saying, so their policy choices assumed (in effect) Martian Death Flu.

And, yeah, so much resistance to acknowledging that the emergency is now. We needed net zero by 2000. Today we need to be ceasing all fossil carbon extraction and doing something so that we can all continue to eat.