Swift away the old world passes

So we've just had white supremacists elected to a majority government in Alberta.

We've got white supremacists in majority government in Ontario.

What is going on?

https://www.nature.com/articles/nclimate3322 has the important graphic 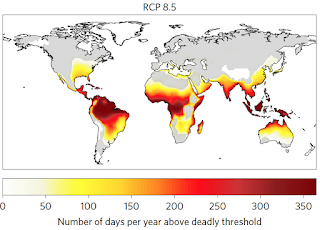 All power is unitary.

All power is also social; it arises from people co-operating.  If people ignore you, you have no power.

Carbon-binge status quo arises from the military utility (and then general ubiquity) of fossil carbon power sources.  It's traded a brisk and global round of looting for (probable [0]) human extinction.

This is the kind of thing that leads to a loss of legitimacy; people stop thinking it's a good idea to do what you say.   If the extinction isn't especially abrupt, circumstances become risky for incumbents in positions of power and authority.

There's three possible responses to our present circumstance; you can go authoritarian (the overt white supremacy), you can waffle energetically (everybody saying earnest things about climate change while approving new fossil carbon infrastructure, or, alternatively, lying vigorously in ways meant to prevent coherent action; they're both acting to preserve the status quo), or you can try to figure out how to preserve enough decarbonized industrial civilization to keep as many people and as much ecosystem alive in the future.

There's a lot of political risk in trying to deal with the problem; for example, if you start taking the third step seriously, there's no reason not to, and a bunch of positive reasons to, try every oil company exec since 1980 for deliberate, for-profit genocide.  "But everyone is complicit!" doesn't address how everyone wasn't making policy, and the how the people making policy went for maintaining the status quo.  (It's a bit like a leaking roof; you fix it as soon as you  notice it.  If you wait, everything gets worse.  We've seen the politics of hogging the dry spots play out these last two generations, and are seeing them now.)

Things are now obviously bad enough that the third option -- try to fix the problem -- has open political advocacy that wants to actually do it, instead of waffling about it as a means of maintaining the status quo.  The incumbents think this is an intolerable threat to their current wealth and power, and, well, they do have most of the money, and people are more-or-less defenseless against modern media.  (We're a band-forming social primate; an environment where you get lied to continuously in ways you can't check is not in our evolutionary history, and we're pretty much defenseless against automated approaches to bulk lying.  Were we to survive as a species for another ten or twenty generations, that would change.)

Thing is, we're losing the current status quo.  Sure as death, sure as fate.  Keeping the status quo isn't an option.


[0] the default human thing is being a hunter-gatherer, but being a hunter-gatherer is hard; you need to know a lot of stuff about your specific environment and have a broad range of skills.  Being a hunter-gatherer from a starting place of negative skills and knowledge in a depauperate ecology undergoing a mass extinction?  Not going to work.  Humans evolved in the Holocene, and we've left the Holocene.  "Deadly threshold" means no agriculture there; no ability to do the work, and plants don't like that much heat either.  Add in the other reasons for agriculture to fail.
Posted by Graydon at 23:13

Not sure "white supremacy" captures it. That's a huge part of the dynamic in the US (I don't know enough about Canada to judge). Not so much here in Australia, or in the EU, or India or Brazil. The common thread is the threat to the current pyramid of position posed by the need to scale back, scale down. The two strata that will be hit hardest are the very top and the bottom quarter - and the very top sets the course.

Peter, we definitely have a strong white supremacist movement here - Anning wasn't more than "a bit clumsy" until his response to the Christchurch attacks made him problematic for his allies in parliament. The reason people like him can move so easily between parties is that we have a whole bunch of right wing white supremacist parties... supported by a lot of voters. Think about what exactly "The Tampa Crisis" was tapping into and why Aboriginal Australians die so much younger than white Australians.

I've come to characterise it as nihilism ("existential nihilism, which argues that life is without objective meaning, purpose, or intrinsic value" from wikipedia), specially self-interested nihilism 'life (especially the lives of others) is without value or purpose, I will enjoy what I can before my inevitable pointless death'.

I see this especially in 'climate campaigners' who still insist on living their personal lives the same as the worst of the deniers, flying round the world on holiday, buying rubbish and all the other personal choices that have such a big impact. They really do accept the science, the reality of global warming, but they don't feel it's avoidable so they're just going through the motions in an effort to feel better while they burn the world down. The same feeling (not thought, feeling) seems to drive an awful lot of people right down to "it's probably real but what can you do?"

One common tactic used against change movements is starting to become especially painful with Extinction Rebellion: "protest as I tell you or I will not support you"... forgetting that we've had at least 50 years to develop responses to that, ranging from "prove you'll support us if we comply" (very unlikely) to "you're what we're opposing, change or die" (historically the likely outcome). Arguably Jesus did the same thing in response to the same objection "you'll die, I won't, I win (but I love you anyway)"... no wonder they killed the sanctimonious twat.

I'm not saying that white supremacism is absent from Australia (or NZ etc). Just that it's not the driving force that it is in the US. If I had to generalise across the world I'd say the current state is a desperate effort to preserve existing hierarchies of wealth and status even as the environmental and economic underpinnings rot out. When the beatings stop getting results the first urge is to beat harder...

Peter, I still disagree with you. White supremacism is a huge force here, it's just subtly different than the same force in the USA. We have fewer former slaves, and we don't have the same legacy of civil war. But if you think the treatment of Aboriginal Australians is somehow better than the treatment of US slaves you're sadly mistaken, and likewise the vigour with which that differential treatment is applied and defended is if anything stronger in Australia. We don't need the KKK because most of their their demands are bipartisan policy in Australia.
We don't just have "The Intervention", we have the Uluru Statement and its response, we have the History Wars (we're not even supposed to talk about the Australian Land Wars) and we're still painfully slowly litigating land theft cases from the 1800's despite widespread white sentiment that those cases should be dismissed.
Outside our treatment of first nations people we have refugees, guest workers and the various campaigns to convince brown people that Australia is a horrible place that they should avoid. Oh, and the yellow peril/Chinese menace or whatever it is we call asians this week. And the no-go areas of Melbourne due to gangs of italians/muslims/africans or whatever the chosen fear group is this week.
Do you remember the outcry and hounding when Yassmin Abdel-Magied dared to mention that non-white people have also suffered during our wars? To me that's an example of white supremacy in action - how dare some non-white person criticise, even by implication, the glorious white race and its militant triumphalism! Aotearoa has just has a similar contremps over the threatened inclusion of an Islamic Prayer at an ANZAC commemoration. It's there too.

I'm not saying, BTW, that white supremacism is the main driving force behind Australian climate denial, but it's definitely there. But ... on the one hand we have to repel the asian hordes and definitely don't give them the idea that they can come here for any reason, ever. That's somewhere between pure racism and ecological carrying capacity concerns (and those worried about the latter have an almost impossible task not being seen as racist).

Politicians here are definitely pushing the "it doesn't matter whether climate change is real, what matters is that the darkies don't gain power at the expense of Australians" (they're not even subtle about "real Australians are white"). It saddens me when I see that sentiment from the Australian Labour Party leadership, but it no longer surprises me.

In Aotearoa it pissed me off a lot when Jacinda Arden and co made it clear that there would be no real action on global warming (and then on intergenerational inequality). But that's the price they're willing to pay to at least stop the right wing parties actively making things worse. Sadly the voting population there are almost as bad as Australians on issues like that - they care, but not enough to change their votes. So while Australia gets 90% nihilist votes, Aoetaroa gets 60%-70% and it's still not enough. Both cases a clear majority want to keep doing what they're doing now and damn the consequences.