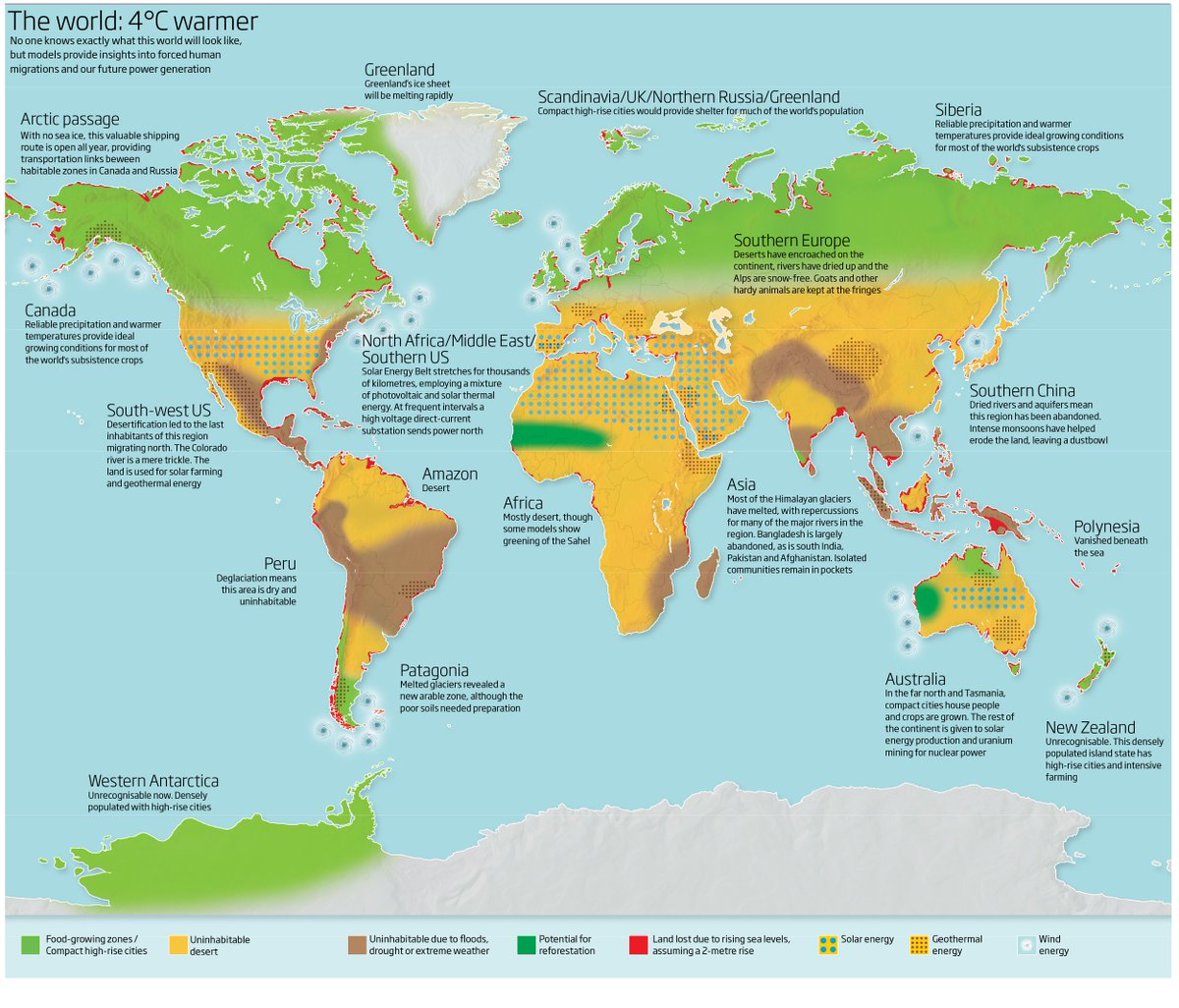 I don't even know where to start.

We might be able to change that, but the appropriate level of effort is "full national mobilization and industrial rationalization", likely for a couple of generations.  It takes absolutely ceasing to extract fossil carbon as soon as humanly possible.  It takes replacing agriculture.  It takes creating a local industrial toolkit -- trade is great, but you can't count on much in the uncertain future; sea level rise or fall has a history of rendering ports unusable, and we could get a century of "is it done yet?" -- that can be maintained at the local level.  Try real hard to keep anesthetized dentistry while you're at it.
Posted by Graydon at 16:14

That's the "rocks fall, everyone dies" map, isn't it? (With 50 years of runup while the USA & Canada frantically shovel CO2 into the atmosphere while China unsuccessfully tries to raise the albedo of the planet.)

What's remarkable is that you can basically see the author/creator go, "wow, this renders all the densely populated sections of the world uninhabitable" and then they just can't bring themselves to follow through to "war and famine exterminates eight to nine billion people". Instead it's "surely we will find some solution that allows migration to new urban areas, right? Right?"

+orc the thing that bothers me the most about that map is that it's insanely optimistic.

Fellow name of Peter Wadhams wrote a book called A Farewell to Ice.

It's worth a read. Very short form -- once the Arctic Ocean goes ice free, things happen very fast for planetary values of "happen". Some of those things are already happening. None of them are good. http://psc.apl.uw.edu/research/projects/arctic-sea-ice-volume-anomaly/ has the Arctic ice volume, which is vastly more informative than the Arctic ice extent.

+ Slybrarian There are plausible technical responses. We don't seem to be doing any of them.

The most obviously misleading feature of that map is the projection. The Mercator projection (or perhaps some cousin of Mercator) makes the land areas that will be newly habitable near the poles look like a not-too-unfair trade for the newly uninhabitable tropics and mid-latitudes. In reality, those arctic regions are much smaller than where humans currently live and grow food.

At this point, I think our best hope (beyond the obvious, and thankfully ongoing, if also far too slow, shift to sustainable, non-carbon fuels) is some form of carbon capture &/or geoengineering. If we can manage any of those on a global scale, modern industrial civilization will endure relatively well, if we can't, it's increasingly clear that it won't.