Cycling is for the delicate

After much flailing about online, much peering at catalogs at the LBS, and subsequent discovery that any 180mm SRAM crank that isn't carbon (that being the shifters and the bottom bracket and I really like the current setup, if only it wouldn't bend in inappropriate ways) would have to come by sea from Taiwan as a special order per the available distributors, I went and looked at the Experiment standing there with no cranks and snapped a little.  (I am paranoid about carbon and the prospect of carbon fibre slivers gives me the cave creeps in a comprehensive way.)

The combination of a crank and BB from High Sierra and chain rings from Praxis will either not bend or I'm going to have to find a new hobby.

And yes, I know, it's almost certainly something like one of the spider arms on that particular rival crank being ever so slightly proud and greatly encouraging the chainrings to fold, rather than an instance of the Everything Is Fragile problem, but that's just not how I'm feeling about the whole thing right now.

(and, also, yes, I know; it's an issue of materials that I can afford to fix.  Tiny subset of first world problems, problem.)

And July is generally not good cycling time due to risk of poaching or poisoning anyway, and I shall keep telling myself that. 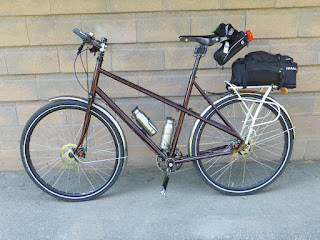 The Rickshaw, looking very un-Rickshaw like with the front platform rack off (because otherwise getting on the GO train would be a dubious prospect indeed!) somewhere along the waterfront trail back from Oakville, which was a lovely ride but right at the sensible limit for riding the Rickshaw for distance.
Posted by Graydon at 13:55

Labels: cycling, everything is fragile, F550, pictures, the rickshaw

If I was in your boat, I suspect what I'd do would be to push down from a 50t chainwheel to a 46t or 44t. (But I spent a good part of a year doing brevets on a 42t single, and then a 42/34 alpine double, only switching to a regular compact double when I found myself spinning out on descents.)

Riding around here is a curious mix of flat or slightly tilted flat (it's a post-glacial lake front/lake bed!) and short bits of steep due to ravines, the Niagara Escarpment, etc. It's nothing like as persistently steep as most of your rides look.

I would really miss the 50 ring on the flat bits, and most of it is flat. (at least a third of it being mostly flat and slightly tilted down.)

That said, if I can bend the Praxis rings in all their density-enhanced cold-forged glory I'm not sure I can find 44t or 46t rings in a tough-enough form, either. But it's certainly something to try if it comes to that.

The nice thing about 44t chainrings is they don't sit nearly as high from the spider as a 50t does; I'm sure you can get pretty stout chainrings, but modern spiders are much stiffer than even the stiffest chainring is.

Can't help on the tech front but... are you harder on components than racing/BMX/touring elite users?

There must be non-delicate elite cyclists who've had the same problem. The solution may not be cheap, but it would be interesting to know.

In archery circles I knew a former top cyclist originally from GB who was 6'7", but his competitive days were probably well before C was widely used, and before Al alloying tech reached sports equipment like bikes and bows.

The last bent chainring was from http://www.blackspire.com/ so, arguably, yeah, harder on components than a great many racers, etc.

Most pro cyclists are compact, skinny, etc.; it's all about the power-to-weight ratio.

So far as I know, there hasn't been anybody over 170 pounds in an elite road anything in the last twenty odd years. (some very tall guys in the 70s, but not so much since.)

This affects how everything gets designed; the cranks I'm waiting for are an alternative to waiting for a production item with a 180mm crank arm to get put on a boat from Taiwan because none of the distributors my LBS can get to stock the things. (note that 180mm is kinda short for me, it's just the longest regular production arm.)

And I can _get_ stuff, it is expensive, it's often slow, and there's this frustrating sequence of "what's wrong this year?" as I get marginally less out of shape and some new thing starts to fail. Last year it was wheels and seat height; the year before that it was frame geometry issues with long rides. This year it appears to be drive train. I'm hoping I'll eventually run out of stuff to go wrong.

Wow - I would have thought even medium-sized BMX riders would push their components harder while dropping off cliffs and bunny-hopping fallen trees, than you would riding mostly-paved flats.