So I got Hugh Black of True North Cycles to repaint the Experiment this spring; this was about the only way of getting the car-scuff from May of 2011 off.  I also got him to retrofit the ability to use SON SL hubs into the front fork. (These feed up through a wire in the fork and take the return via the fork, so there isn't a concern about removing small connectors before you can take the front wheel off.  Figuring out how to connect the existing light to the fork for the return was interesting, but ultimately successful.)

And then I had to get it back together, something that was happening while I had the poor forethought and planning as to move.  (Although the new quarters have way more space for doing things like working on bicycles.  And wider doors.)  So the basic re-assembly took rather longer than planned, and I managed during that to totally botch the rear Berthoud fender install, and realized that the front fender daruma bolt wouldn't work; there was no way to keep it from crushing the in-fork wire, which emerges from under the fork crown.  So I gave up: 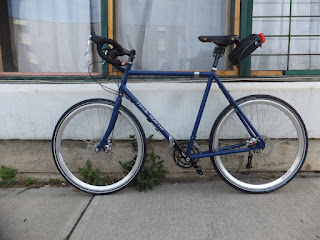 This is probably the only time I'm ever going to ride the experiment without fenders, but I took it over to the LBS and said "help! fenders!" and got the problem solved. (Matt, at Cycle Solutions on Parliament St., is a great guy in good company.)

Getting there had the unfortunate consequence of managing to bend the 50 tooth chain ring; since I'd acquired an Avid steel ring over the winter to hopefully avoid that happening, I was kinda sad. 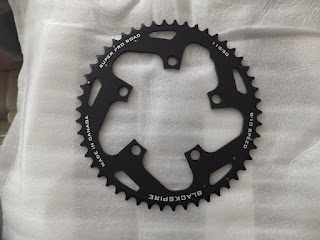 The recommended fix (again via Cycle Solutions); 7075 aluminium alloy and much thicker than the standard SRAM rings.  I feel a little silly with high-end racing drive train components (today's ride had an average rolling speed of bang-on 5 m/s.  This is so not racing speed!) but if it doesn't bend (and so far, it's lasted longer than SRAM Rival and Avid steel chain rings have) it could be Chernobyl Canary and that would be OK.
Also, it shifts really nicely. 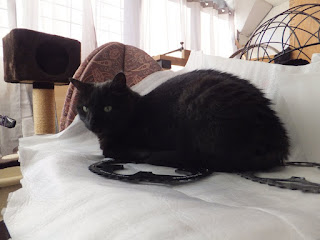 Less OK is the whole notion of leaving the apartment; Aoife doesn't approve of that, and figures that if she keeps a good grip on the bike parts, I might finally display some social sensitivity and figure that out. 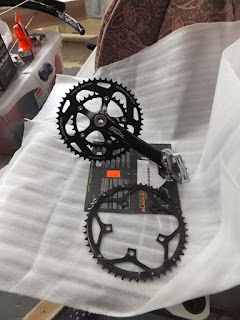 I was a big meanie and took the chain ring away and installed it anyway; the one in front is the Avid steel ring that I removed.  The cranks are rather chewed up due to the (connex, mostly nickel, thankfully apparently indestructible) chain getting dumped on it repeatedly due to the Avid ring being bent.  (Only about three-fifths of a chain thickness, but that's more than enough to dump the chain if the load comes on it wrong.) 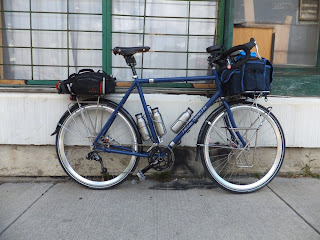 The Experiment, all back together.

I got to keep the third water bottle position, despite larger tyres and new fenders, by resorting to a very minimalist Avid water bottle cage.  The front two are Lyzene, which have the advantage of working well with the Lyzene back-of-the-bottle-cage pump mount (you can just see it lurking back there) and holding ferociously; the bottles do not rattle whatsoever.  Which means the finger rings don't hit the frame and make me wonder what's about to fly off the bike.

Now if I can get some weather that avoids humidex or smog advisories...
Posted by Graydon at 00:06

But if you don't leave the apartment, there will be no cat food!

So far as I can tell, Aoife's smart enough to realize that I go out _much more often_ than I return with cat food, and to disapprove of the going out on the basis that if I'm not returning with cat food, it's obviously excessive.