Partially because I want to be able to run 12-36 cassettes, and if I'm going to do that—which implies a "mountain", in this case X9, rear derailleur—I thought I might as well move the rest of the drive train up the food chain one notch to SRAM's Rival, instead of Apex, components.  Probably not a huge improvement in quality but that little bit tougher can be a good thing. 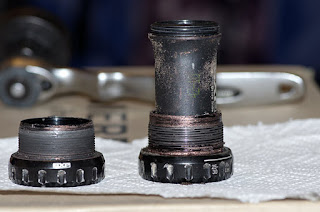 SRAM Apex bottom bracket; it has not quite 1400 km on it.  I was somewhat trepidatious about pulling it, but that all went fine. 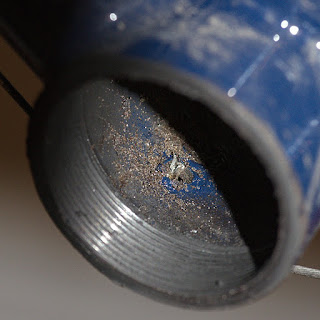 I believe that's some sort of small bug, wedged into the unused hole for attaching the bottom-of-the-bottom-bracket-shell cable guide.  Also, sand and other guck.  It's pretty much harmless, because the bottom bracket is sealed and the titanium frame is not at much risk of corrosion.  Having what amounts to a drain hole is probably a good thing, if only so moving the seat post isn't like trying to compress the air in the frame. 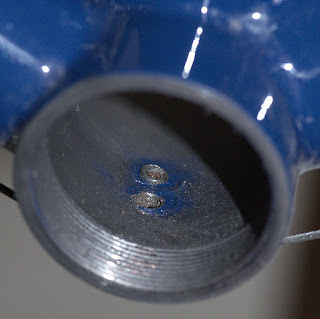 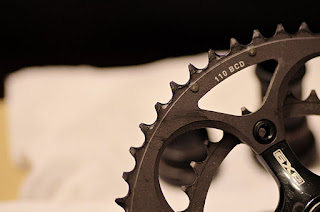 Apex crankset; I was initially appalled by the variable tooth heights until I looked at the new one and realized that SRAM does that on purpose.  (Various $BRAND-glide technologies.)  The grease is Connex spray-on chain grease; it's film-forming, and insanely stubborn. (as in, it does not come off when you wash the chain in hot water and hand cleaner.  Though fortunately the road grit did.)
Posted by Graydon at 23:11