I have been wondering if the gearing—straight up SRAM Apex, 50/32, 11/34, which gives, with 180mm cranks, gain ratios between 8.6 and 2.0—on the Experiment is really suitable for loaded touring.  It's obviously suitable for axial-bag-only riding about, but it wasn't at all clear I'd want to go anywhere the least bit hilly with panniers.  Since there are a number of nice multi-day touristy sorts of rides up near Peterborough and in diverse other places in Ontario where, lo, there are hills, I though this would be a good question to resolve.

Since the question didn't appear to be especially amenable to theory, I figured that since I needed to take some panniers with me on the Niagara weekend with the long-suffering zingerella, (since, however long-suffering, putting up with me in the same cycling clothes for four days would be Rather Much) I might as well err on the side of stuff and resolve the question.

So on Thursday morning, when I weighed the bags, I got:

And it turns out I can do that, somewhat to my surprise. 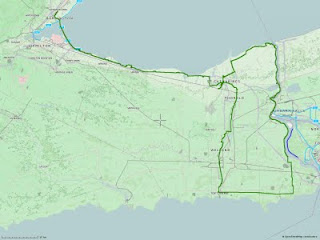 Day 1 was Burlington GO to Port Colborne, via the truly excellent, bike-friendly Pan Cafe in St. Catharines; Day 4 was Port Colborne to the St. Catharine's train station, to pick up the end-of-the-summer GO bike train back to Toronto.  Days 2 and 3 were indolent, with minor sidelines in traipsing about Port Colborne but mostly taking advantage of the glorious hospitality of the Talwood Manor B&B to revel in the knowledge that no one at work had the slightest idea where I was.

Day 1 was 110.45 km, counting the ~4.6 km riding to the Exhibition GO station along with the ride from Burlington to Port Colborne; Day 2 was 103.3 km.  (No in-Toronto distance; I took the subway home from Union Station, as rain and pitch dark and tired were adjudged a bad combination.)

So, things I have learned: