It's actually 1055.87; I passed a 1,000 km for the Experiment very early in this ride.  But I really didn't want, for what are purely superstitious reasons, to tackle this weekend's ride-round-Niagara with its couple of 100 km days (though thankfully not adjacent 100 km days) without getting past 1,000 km on the summer first and there were mailing list posts about interesting birds in Rattray Marsh, which is really not all that far away. 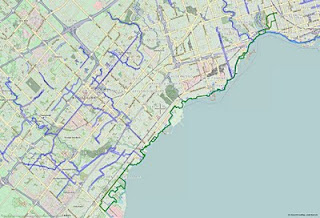 I think of the Lake Ontario shoreline as being basically east-west, but that isn't true past Toronto; it's narrowing down to western end, where Hamilton is, and then it goes in a curve to the Niagara River.  (not shown; I certainly didn't get that far today!)  Which means I should take reports of south-west winds more seriously when I'm thinking about heading west along the lake; what's an annoying crosswind/wind on the bow along the Toronto waterfront is an outright headwind once one hits Mississauga.

So it was basically 30km of horrible headwind, and another 30km of my, this is a nice set of trails along here, and while my legs have bad things to say about my basic good sense for riding into that head wind for that long, nothing has (avert!) gone and collapsed into the Bad Leg Cramps, which I am now sure are a product of having the seat creep down a bit.  (as in, it looks like under 1cm drop is enough to throw everything off, happy-legs vs unhappy legs wise.)

A better seat post clamp is on order; in the meantime I'm tightening this one (a replacement for the original, the pinch bolt of which made the ping! noise) as far as I dare.  (and have a spare in the tools bag.  Because of all the five dollar parts to have cripple one's ability to ride, I think I'd find the seat post clamp particularly hard to take.)

Taking to the end of August to get past 1,000 km feels awfully slack, but, well, job that I can't cycle-commute to, horrible sinus thing, two weeks of no front wheel courtesy of that car at the start of June, and July weather inconducive to both exercising outside and not dying at the same time.  So it could be better, but it doesn't actually suck, or at least not suck rocks.

The Experiment continues to be a delight and an indescribable improvement on any previous bicycle.  I am going to see just how well I deal with the Niagara Escarpment this weekend before seriously contemplating drive train changes for loaded touring, but I'm at least somewhat hopeful I won't collapse in an expended heap in a ditch anywhere.  (I've been zooming about with a front bag and a trunk bag, but not panniers on the whole.  I suspect the panniers will make a difference...)
Posted by Graydon at 23:13