So far, no cramping

Avoiding the bad leg cramps[1] might be as simple as an average speed under 5 m/s, which makes me feel like an utter slug but a slug who must acknowledge that the cycling isn't happening as much as once a week, never mind more than once a week. (Curse you, combination of deadlines and determined work ethic!)

This was not a planned loop; this was a "let's go down to the Martin Goodman and see if I can make it back to the Cherry Beach Chip Truck if I go out Tommy Thompson" sort of thing, and then I went up the Don instead of straight back home because I am very bored of the parts along Queen's Quay where there isn't a bike path or bike lane and one must play "what will we have to dodge today, Brain?" with extra bonus "crush, concuss, or contuse?" rapid prioritization skills testing. 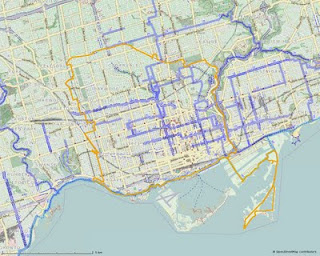 It amuses me that the altitude change never comes out to zero, despite starting and stopping in the same—to sub-metre resolution—place. 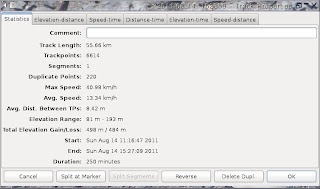 Tommy Thompson Park is an artificial breakwater/harbour extension thing, made out of excavation fill and building wreckage (there are place in the still-being-added parts where you can find yourself riding over ten metres of broken tiles, pounded roughly flat by being run over by a bulldozer; as tyre tests go a fairly convincing one) and it has been, historically, almost completely left to its down devices to turn into whatever sort of urban wilderness it wants.

I remember when this view was a blasted heath of broken bricks and a certain sparse quantity of struggling forb; it doesn't take the prying roots all that long to turn bricks back into mud. 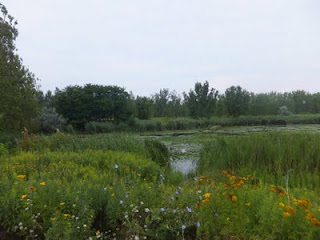 The lighthouse at the tip of the park; if you go and build something 5km out into the lake, it's presumably polite to provide encouragements to the shipping to avoid running into it. 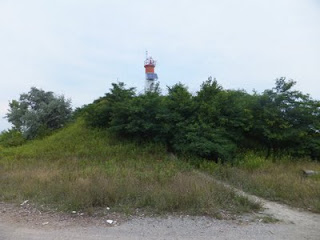 His Noodly Appendage; there's a fair bit of free-form sculpture attempts on the still-being-filled margins of Tommy Thompson, and sometimes it's people and sometimes it's the lake.  The great big ball-of-yarn rebar free-form stuff is, I am nearly certain, the lake.  The various inuksuit are, I am nearly certain, humans.  This one may be a collaboration. 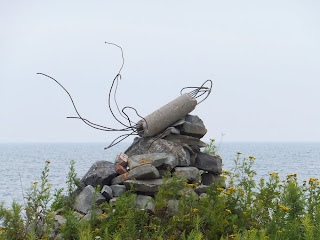 [1] There were leg cramps, and they started right about 55km this time, too, though in response to an attempt to go quickly because I really wanted to get home before the thunderstorm happened.  They were nothing like as bad, and have been nothing like as bad since I got off the bicycle; pre-emptive ibuprofen and taking the lunch vitamins when I got home seem to have helped, he says, making the sign against evil.
Posted by Graydon at 19:02