A Win for Discretion

So instead of going birding or grabbing a camera, I went for a bike ride this morning. (I dread the probable consequences of trying to stick to my end-of-summer trip plans if I don't manage to get into much better shape first.)  The route, well, the route had some issues, especially around getting back from the Birchmont Ave end, but the rolling average stayed above 5m/s and I went a bit further (64, as distinct from the intended 60, km), so I need not be ashamed.
Also, Gerard and Harbord streets early on a Sunday morning, for decadent cosmopolitan "before 10 AM" values of early, are remarkably empty.  This is something to remember for next time. 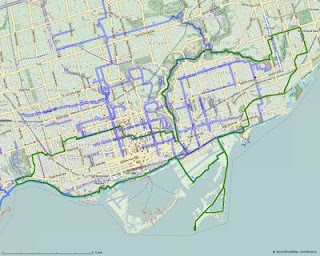 Just before this picture was taken—I even had the camera out already, I was taking pictures of the fountain, but I didn't notice what was going on until it had more or less happened—the dog, I presume some sort of border collie, waded into the pond at Woodbine Park and attempted to ask a pair of trumpeter swans [1] if they would like to play.  The (presumed) cob swan adopted a particular head posture that I would expect went with a hiss, and whether due to some deeply buried bit of mammalian evolution that still puts in the "that noise? theropod!" association when brains get constructed, or some level of "hey, wait, I am up to my neck in water" discretion, the collie decided that it would be best if it got out of the pond and went back to its people Right Now. 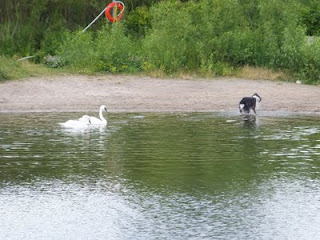 It's not often you seen a collie have quite that much sense.

[1] Squee! in a park! in actual Toronto, not the waterfront urban-wilderness-fringe, even if it was a park just barely inside my idiosyncratic emotional borders for "actual Toronto".  And yes, completely sure; I have some pictures from much smaller distances, and the red bill lining shows in one of them, never mind the long, all black, wedge-shaped bill.
Posted by Graydon at 17:42