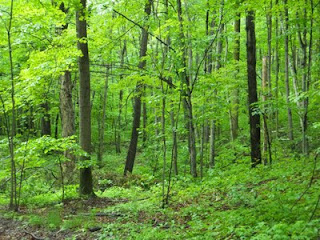 That's not too far off, colour-wise, when the clouds thinned a little and there was a softening of the morning rain.  (By afternoon it was a case of being a bright sky, occasionally intimating that it had not forgotten how to rain.  But for most of the morning it just plain rained, with varying degrees of haste and thoroughness.)  Happy Valley is billed as old-growth; it's not, it's not even particularly close to it, but they're trying, and going the right way.  In another three centuries it will, if undisturbed, start to resemble wildwood.  (Though to really do that they're going to need hundreds of contiguous square kilometers, enough for a stable population of apex predators on the big leaf-munching ungulates.  Given current Canadian demographic trends with regard to urbanization, such may yet come to pass.)

There were birds; surprisingly plentiful birds for the end of June, never mind "for the end of June in the rain".  Some of them—the scarlet tanager, the field sparrow, the indigo bunting—took on a quality in the scattered, refractive, fluid surrounding of diffuse light a seeming that in clear daylight only in bluebirds and great egrets have, the character of a creature that burns through from some other, more vivid reality, to shine in ours with a fey outline of presumptive solidity that reduce those things behind and around it to the drabber status of backdrop.
Posted by Graydon at 20:40