So the plan was to cycle around the Niagara Peninsula this weekend; take the GO train to Aldershot, and away off past Hamilton and into the Niagara Region, specific routing to be determined by actual prevailing winds on arrival.  (Clockwise or anti-clockwise, that is the question...)  B&B all booked, maps printed, everything packed, etc.

What I didn't plan on was getting hit by a car on the way down to the GO station.

I don't think it's a door prize when you get hit with the outside of the door; guy on delivery pulled out of a wee parking lot into me. Fortunately, this happened at a low speed, in part because I'd already slowed down because I thought the previous small movements of the car meant he was parking, rather than un-parking, and proceeded past on the supposition that he'd finished.  He acknowledged that he hadn't shoulder-checked before pulling out, I've got a photo of his driver's license, and I don't imagine I'll need it, since I have a slightly bruised right hand and a tiny bit of road rash below my right knee; too trivial to describe as damage.  (also a light jacket with a hole in it and a knee warmer, ditto.) 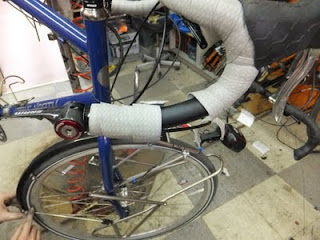 That's a mechanic at the LBS checking the degree to which the front wheel is potato-chipped; enough that I need a new rim, is the short answer. ("It would never be the same", discussing an attempt to straighten.)  I had already rotated the right shifter back to vertical (it was rotated about 90 degrees to the right), popped the right hand side front fender stays back in, and field-expedient straightened the handlebars with respect to the front wheel.  And, pretty obviously, some new bar tape.  Based on the queue depth and the expected order time for the rim, probably Thursday before I get the Experiment back.

So no bike trip around Niagara; called due to lack of bike.

Plus side?
Well, being hit with a car could have been arbitrarily worse.  It was within ready walking distance of home, too.

Arkel XM-45 panniers hold a lot of stuff.  All the electronics survived, including the dynamo hub.  I was going to have to re-tape the handlebars anyway, to rotate the crosstop levers back up to a more ergonomic position after taking the Arkel bar-bag mounts off them.  The mechanic at the LBS was really happy to get his hands on R2C shifters.  Zingerella left the whole thing of breakfast bars here, on purpose.
Posted by Graydon at 22:16

Holy crap, Graydon. I gasped when you said you were hit by a car. My adrenaline accelerated brain quickly realized that if you were blogging about it, you couldn't have been too damaged but yikes.

Logically, I shouldn't worry about you getting hurt again when you won't be cycling for a week or so.

Take care. Call if you need anything.

I hope his insurance is paying for your repairs.

tumblehome -- just fine, really. And, well, there are limits to care; not a lot one can do when someone moves into traffic without checking.

Janice -- nope. New Canadian working as a delivery driver. Not interested in destroying his livelihood (which is what reporting the collision would do) and I can comfortably afford the repairs.