Very wee; 20 km. Enough to be reasonably sure I haven't utterly flubbed the handlebar re-alignment and to make Aoife look concerned when I get home. 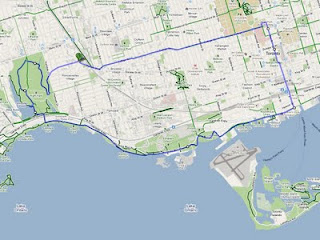 There were perhaps 10,000 people in High Park, mostly looking at the cherry blossoms. (And the flanking apple blossoms, and probably also the waterfowl, new leaves, and general indications of the greening spring.)  Which made that part of the wee loop really, really slow, but the rest was pretty good for a Sunday.  The usual folks on roller-blades somewhat deluded about how fast they were really going (I get the impression that roller blades feel much faster than they actually are), family clumps going the wrong way on the bike path and ignoring the boardwalk 10 metres away, and a scattering joggers similarly unclear on the concept that they do not have wheels and might be subject to the "proceed on the right hand side of the track" convention.

Oh, and cyclists who ignore red lights, stops signs, due caution at crosswalks, and the concept of directional stability, too; I would not want anyone to think I'm prone to excepting other cyclists from the outbreaks of grouchiness.

It was really a lovely spring day, though, and the grouchiness failed to last.

Aside from the handlebar alignment, I found out that the finger-loops on my water bottles (which rotate freely on the neck of the bottle) can rattle like a fender about to disintegrate by knocking on the seat tube.   Someone, somewhere, must make really good stainless steel bike bottles, but I haven't found them yet.  (The Filzer bottles I have aren't actively bad, but could be improved.)
Posted by Graydon at 15:58