So I found out that, contra the (very nice, and just as surprised as I was) director at the company I'm consulting for, the property company has an inflexible policy that there are no bicycles permitted in the building; they do, after all, have dedicated exterior bicycle parking.  Said dedicated bike parking is, well, it's adjacent to the parking lot, which has no access controls and is behind the building; it's unobserved and mostly un-observable, being tucked into a corner by the loading dock; uses odd split wheel-only locking stations that are bolted into the concrete and could be unbolted with your common-or-garden 12" adjustable spanner, 2 bolts to the bicycle (the folks who use the space (all five of them) are using the surrounding railing to lock their bikes to, oddly enough); and, most vexing of all, is apparently the product of a sincere desire to encourage bicycle use.

Since I like the Experiement and wish, very much, to keep it, I won't be cycling to work anymore.

Which made Monday's trip home, well, especially interesting; it was going to be the last one, and I tried what ought to have been a pleasant variant on the "let us minimize major roads" route I'd taken to work. (that had not worked so well as I would have best preferred; 2 uphill km of a busy part of Leslie was decidedly sub-optimal, as was getting lost and winding up crossing the 401 at Bayview, rather than Yonge (though the Bayview crossing is arguably better in most respects) but, hey, it was at least mostly scenic and had fewer stop signs than the previous attempt.)
Until I ran into the slight problem that Google's routing for bicycles doesn't take into account things like flood control projects: 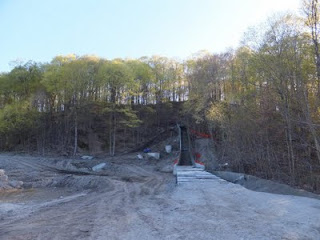 Which, while doubtless necessary and useful, rather remove from the bike path any kind of actual present utility.  (Off to the left there is some unbridged river, and I wasn't feeling quite that determined.)
Which meant  that the route recovery procedure was to get off and push the Experiment up a couple-four hundred meters of grass-grown ski hill, complete with chair lift.  I ought to have taken a picture at the bottom, but I didn't, and the view at the top is lovely: 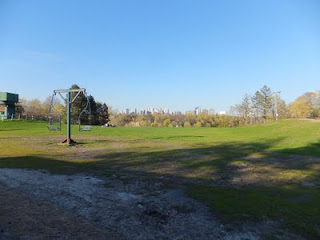 From there, the rest of the route worked; there was minor delay due to a freight train: 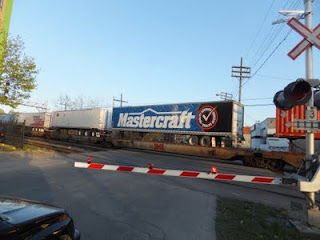 but, hey, a chance to sit at a level crossing, drink water, and take some pictures was not to be disdained by that point.  (This is just before picking up the 3km or so of new, smoothly paved, and downhill rail trail that is the last stage of the trip home.)

Whereupon I got home and discovered that the occasion of deck removal my landlord had warned me about in general terms had already happened: 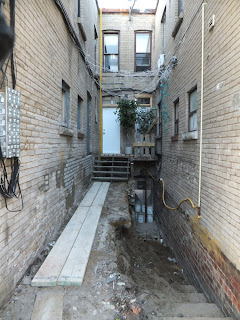 One can surmise both where the deck used to be and why the landlord wanted to replace it; the stringers had been driven straight into the brick, which was not benefiting from this.  And it's all replaced now and generally improved, but this was still rather more care in getting the bike in the door than I really wanted.
All of which is a minor inconvenience, really; I'm less than pleased about the not being able to cycle to work part, but I'll live, and not having to cross the 401 is probably good for my life expectancy.
The "ow" is the discovery that the vague snuffly feeling  that had been going on for some time now (as in, some months) wasn't pollen, riding in traffic, or just plain unaccustomed exercise, it was an infestation of what could pass for satanic lemon curd, later diagnosed as sinusitis.  I now have antibiotics and some nasal spray and things are much improved, leading to me noticing how much it still hurts and how much less it hurts than it did before the antibiotics.  (The family pain threshold can be unhelpful, example n for large n...)  But it is getting better and I can hope that it shall well and truly go away this time.
Posted by Graydon at 20:40