This is mostly plausible, except for that somewhat sparse east-west straight line that involves walking on water: 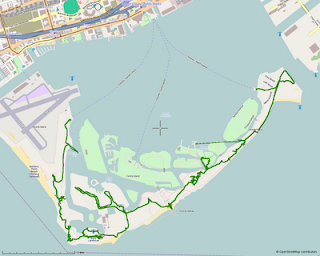 and most of this is plausible, but the peak speed would require some explanation: 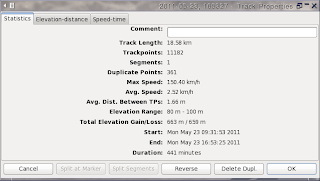 But, still, a reasonably representative depiction all in all.

Saw more birds than I want to type in; highlights include a pair of house wrens nesting in a concrete light standard, a cooper's hawk staring back down at me from its tree (a freaky experience; it might well be able to see my eyes through the binoculars, and was certainly acting like it could), some highly co-operative indigo buntings, two immense snapping turtles, and a great crested flycatcher holding still in unobscured direct sunlight for at least ten seconds.

Eighteen km of walking is much more work than fifty kilometers of cycling.
Posted by Graydon at 22:02