Which meant getting to Guildwood, and the nigh-traditional Exhibition Station start. 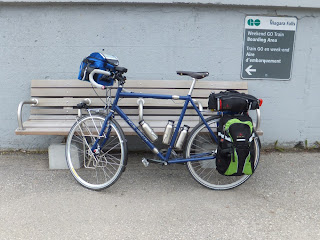 The entire park was gorgeous; there's a variety of habitat, some considerable stretches identified as good for mourning warblers (which were heard, by those with suitable ears, but not seen), and if it rained it did not do so very thoroughly until we were quite out of the park.  Twelve kilometers is fairly long for a bird walk, but not fatally so.  And even on bicycles, it was a very pleasant, quiet, full-of-spring-and-birdsong thing. 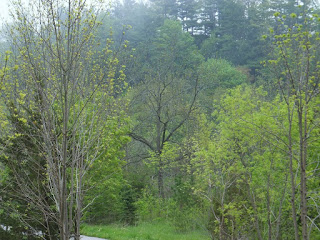 The rain did get more thorough after that, but not so much so as to make enjoying the ride impossible, or even very difficult.  And by the time we got to the Ajax GO station, the sun had come out, something those of you with delicate aesthetic sensibilities are likely to regret: 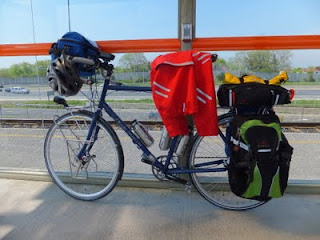 (Or, at least, you may regret that the Ajax GO station is quite so elevated and transparent as all that.)

It was a nice ride, if a bit (40km) short, and I have put walking the route (or, rather, the part of it between Guildwood and Rouge Hill) on my calendar for next spring around peak warbler season. 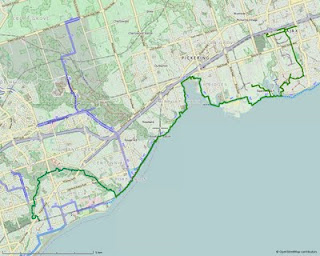 Also, next time perhaps I will be able to find the actual bike trail up to the Ajax GO station, rather than engaging in the pathfinding equivalent of flailing about in the wilderness.
Posted by Graydon at 21:06

It was a pleasant ride. Did any of the trillium photos turn out?

Not really, no. Almost, in one case, but parts of it still washed out.