Yesterday (26 Feb 2011) I accompanied birding buddies Dave and Bob on a walk around Tommy Thompson Park, in the hopes of seeing the pair of juvenile King Eider reported there.  Which we did, with good stable views with the birds on the water in the open sounds in East Cove. 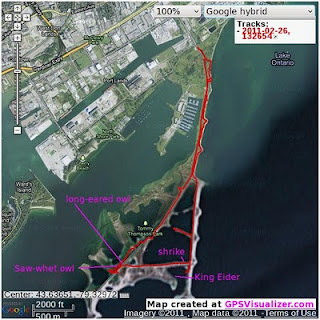 And no, I don't know how we managed sixty more metres up than down.

In total, there were 19 species:

A very good day for the end of February.
Posted by Graydon at 14:14