After a September plagued by poor timing, a bit of bronchitis, and badly-labeled ice-cream substitute (label claimed no soy; distraught innards asserted that, yes, yes there was soy in there), I finally got out on a Fall Migration walk. 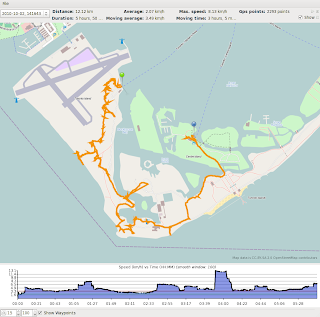 With, as is perhaps obvious, the brand-new Delorme PN-60 GPS I got primarily because cycling in strange places is a whole lot more fun when I feel like I know where I am.  (Downtown Niagara Falls in the dark, on a bicycle, looking for the motel?  Not fun.  Though next time I will remember that a GO train is not a point and we could be getting off said train already past the street we were expecting to turn down when leaving the station.)

Anyway -- having obtained the interesting bit of tech, I am also curious about how long a bird walk is; I can readily enough figure out how long the point-to-point distance would be, but this is so very rarely how it gets walked.  So now I know for this one, how long, how fast, and what portion of the time spent moving.  Plus, courtesy of gpx-viewer and Open Street Map, a spiffy map.

The best bird of the day  was unquestionably a Le Conte's Sparrow; I missed it.  (At the back, heading up slowly to the cluster staring at it on the airport fence; it flew about a tenth of second before I got it in focus.)  Also, the day went from a spectacular sunrise in a sky with mixed cloud to clouds like a lid to drizzle to steady rain, which is not a source of great joy, no matter how carefully one has dressed for the possibility.  (Which explains the early end and the departure from Center Island; usually, this walk leaves from Ward's.)

On the plus side, the traditional oodles of white-crowned sparrows were present; I got a good look at a pine warbler, and a very nice look at a black-throated green, which, to me, and especially in the misting rain, look like they were assembled by elvish jeweler's out of malachite and beryls; I may now understand how to differentiate the ruby-crowned and yellow-crowned kinglet in the fall (the ruby doesn't show any crest in the fall, the yellow-crowned does); the belted kingfisher on one of the inter-island waterways was still there and did a display flight, apparently just for us; a very plausible Cooper's hawk, several sharpies, a rousing argument about distinguishing Cooper's and Sharp-shinned, and a Northern Harrier; Dunlin, Sanderling, and Black-bellied Plover on the beach; and rusty blackbird and pied-billed grebe on the same small pond.

And, hey, not only did the GPS work, the available software for viewing GPX track files is uncomplicated and effective, which is a good thing to find out.
Posted by Graydon at 15:53

The graph shows a sustained burst of speed of +11kph for about 30 minutes. If that wasn't the ferry, I want to know what was chasing you! :-)

I blame the smoothing algorithm; registered max speed was just a tinge over 8 kph.

Still, gpx-viewer (the app in question) summoned the map itself from the OSM guys without any fuss, so I'm quite pleased to have found it, smoothing tinges or not.