What a marvelous bird ... 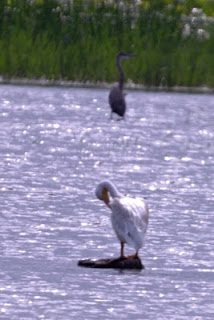 This particular American White Pelican has been at Second Marsh in Oshawa for the last month and a half, and while they nest in Ontario this is generally in remote lakes between Thunder Bay and Manitoba.  So having one in Oshawa is a cool thing and I've been meaning to go see it for awhile.  Indeed, I have been trying to go see it on available Saturdays, with the general plan being to cycle to the Exhibition GO station, take the train to Oshawa, and cycle from the Oshawa station to the marsh.

I finally managed this, and the bird co-operated in terms of being highly visible, but not so much in terms of distance.  This is probably the least-bad photo; I need to work on my focus technique for using 1500 mm focal length telescopes as lenses, and it would really really help if the viewing platform wasn't wood and inclined to vibrate if anyone on it shifts their weight.

The first such attempt to see the pelican involved realizing that I could not, no way, no how, get the scope bag, the tripod, the eyepieces and the bins bag into any combination of two panniers I actually had, the second such involved a ping noise from my bicycle, which was the sprung seatpost electing to come unsprung; the third attempt involved at slightly separated times the front handlebar rotating forward under the weight of the bar bag so that I could no longer quite reach the brakes and the right rear rack mount—a bit of bent aluminium to get around the lack of an attachment point that didn't conflict with the disc brakes—electing to make its very own little ping noise.  Given that there were about 30 pounds of stuff on the rack, this resulted in an unpleasant shimmy and a longish walk home from almost to the Exhibition GO station.

The fourth attempt, the fourth attempt worked, by dint of getting a new frame, which is very nearly actually long enough—height is not the hard part, it's seat tube length; this one is 63cm in the catalogue, though I don't know where they measure—and some Arkel shopping bag panniers, which will just take the whole scope bag in one and everything else in the other, and by getting a new solid seat tube.  The drop bars and bar end shifters are in the way of spending a little now to ensure  that the eventual touring bike is not spending a lot of on something that won't work for me. 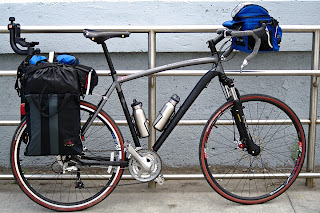 This photo was taken while waiting for the train at the Exhibition GO station on the way out. (On the way back, there were beer festival and soccer fans by the several hundred.)
I'm quite pleased with the whole thing; there's a tendency to shimmy at high speeds when loaded like this(the shopping panniers are square like cinder blocks, so I should not be surprised) and the bike is similarly not as entirely directionally stable at low speeds loaded as I would best prefer but I think a fair bit of that is my lack of familiarity with drop bars.  The bar-end shifters are fine, though I find myself wanting the SRAM R2Cs for the touring bike because while I can certainly use a friction front dérailleur shifter I find that I want indexed if I can get it.
Posted by Graydon at 19:39

I suspect it's not the drop bars, but it's where the handlebar bag is mounted. My MLCM has a handlebar bag too, and despite my having ridden nothing but drop bars for the past 30 years it still wants to hunt all over the road when it's fully packed and I'm moving slowly.

If you could find some way of mounting a front rack, you could move the bag down and back, which should both reduce the lever arm and reverse the way it wants to twist the front wheel.

Thank you! A cogent and telling point the which I had not considered.

Most probably because I think of the front bag as light even when I've got a K20D, a litre of mixed nuts, and various bits and bobs of sunscreen and hand cleaner in it, which is just silly of me.

The touring bike, when it arrives, will have a front rack. I'm not at all sure it's possible to get a front rack on the town bike's fork, but it gives me a potential other option for something to do about the cat basket, which could indeed do with being carried a bit lower if I can figure out how to do it.

That Arkel handlebar bag has a clever and very, very sturdy mounting system that I rather like, even if it does do in the directional stability at low speeds. (It didn't, particularly, with the previous frame+fork; made the front wheel twist when stopped, emphatically, but I didn't notice it as much of a problem at low speed.) Have to try riding the town bike without 30 lbs of birding stuff in the panniers, and indeed with no panniers at all, to see how bad it is then.

It may not be so much the bag's weight as hysteresis in steering inputs due to slop between the bag's mountings and the bag itself, partly due to the flexible nature of the bag, and by the sound of things the formidable momentum present in the bag's contents.

I've generally resolved this in the past with bungees from the bottom corners of the bag to the front axle mudguard eyes, but I don't ride anything with front suspension, which will open lots of scope for 2nd order effects.

I doubt it's slop in the bag mounts; those Arkel mounts are metal-to-metal at both ends, and the bag end mount (that the bar-end mounts slot into) is bolted to a rigid internal composite frame for the bag. This could easily make it worse; I'm attaching a pendulum on a rigid arm right in line with the front wheel, and with the centre of mass about on the level of the handlebars.

This particular front suspension I can turn off, and maybe I should try that.