It's rare that they'll sit still on branches, or at least sit still on branches when there's a large house ape with some sort of shiny clicky thing pointed at them, so the feeding priority introduced by the snow was useful to me in as much as they got into what seemed for all the world like a line for the feeder and then stayed put. 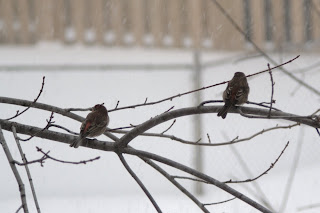 This is a little later in the day, not snowing so hard, and the balcony railing below the feeder. 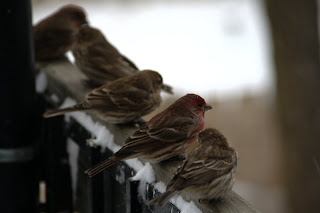 Also saw (but was too slow to photograph) goldfinches on the main platform feeder. Don't know if they were after peanuts or oilseed, but were presumably feeling the chill to be after either.

I was pretty happy about that one.

It seemed clear that there was a definite hierarchy involved. (Much flapping and cheeping if there were any violations of the proper order.)

Much better weather today, and many fewer birds; I hope that this means that the majority are eating things they like better, rather than being frozen to perches somewhere.