Not a bad crowd 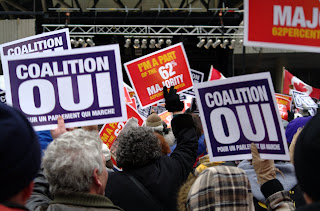 Not a bad speaker, either; an accent in English but comes across as good kinds of clueful and good kinds of concerned. I do wonder if this doesn't come across well when televised. 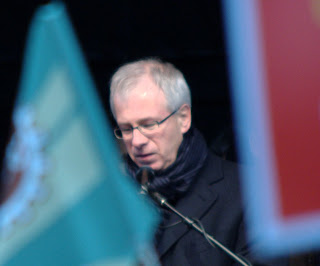 The snow held off until both Dion and Layton had finished speaking, which was nice of Her.
Gave me a new respect for folks who photograph crowds, too; all those waving placards make things like focus rather tough.

Labels: the lady of the ice, the survival of government

Sadly (and I am very, very sad about this, as I think M. Dion is possibly the only politician whose motivations are anything approaching pure in this), I still think that M. Dion should give his speeches in French only. It is understandable, but lamentable, that in English his delivery is wooden, and he gets the rhythms wrong.

The effect of this, to the general public, is rather like listening to Nixon testify. His conviction, his belief that the coalition will work for Canadians, and that it's a lawful thing, doesn't come across.

People hear the tone as much as they hear the words, apparently. In French, his tone and his words match. In English, not so much.

This saddens me, greatly, as many people listen only in one language.

Pity the business wing of the Liberals wasn't more foresighted.

I don't have a problem with his English diction because he sounds just like senior NCOs of a Francaphone background, and I've already got the filter. (Well, possibly there is also that I am weird and have a deep words buffer.) Certainly his French delivery is much better, but, well.