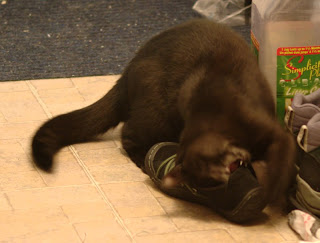 I'm afraid my entrance mat does need vacuuming that badly.

Aoife does not normally react to shoes like this; I would be forced to conclude that she has formed a lamentably poor impression of the cats in the keeping of this particular guest, were in not for the immediately prior attempt to stuff her entire head in the shoe in question.

Perhaps she feels it pinched her ears maliciously?

In any case, in keeping with the universal law of cats, being photographed doing anything the last bit cute caused her to lose all interest in the activity and stalk off.