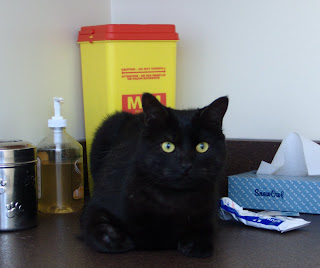 I was afraid when I took this—Thursday morning—that I was taking the last picture of Aoife I was going to get.
She's on the examining table in a vet clinic (not her usual vet clinic, but that's another post with a parakeet in it), having being brought in due to being off her feed, lethargic, and passing blood. Since my grandmother lost her dog to a mess of cancer very fast after just about exactly those symptoms, and Aoife has a certain obessiveness about string, I was—characteristically—expecting the worst.
Turns out that she shows no sign of any foreign tensile objects, or other dire symptoms, but does have a certain amount of inflamed innards. I've got a broad spectrum antibiotic, a "digestive motility enhancer", and an emulsion that's effectively the feline equivalent of pepto-bismol to give her; the pills are twice a day each, and the emulsion is thrice daily, with a little syringe. From the faces she makes, I'm pretty sure it tastes awful.
So far, he says, making the sign against evil and the sign against ill luck, she has not been making more than pro-forma protests about being pilled. Not even all that many feline swear words.
There is also special food, specifically easy to digest; so far as I can tell from reading the label, it's duck pudding, and for a wonder my seafood insistent cat is condescending to eat it.
Aoife is certainly seeming much better; I have been mugged for string five times this evening so far.
whew

She's getting decidedly more opinionated about being pilled, and generally showing signs of improvement, so I'm feeling hopeful.