Birding at the office.

Pictures taken with my pocket camera, which is pretty good for a pocket camera but which has only 4x optical zoom, and subsequently cropped and sharpened fairly drastically. (Except for the fourth photo, which is straight off the camera aside from the cropping.)

Ok, so it's certainly a hawk of some kind. The head is feathered, so not a vulture; the wings in flight were not pointed, and the eye lacks the yellow rim and proportionately large size of falcons. The beak and the feet certainly indicate some kind of predator, and it's way way to big to be a shrike! 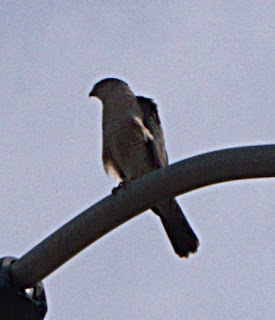 If I zoom this to a ridiculous degree, I'm pretty sure the eye is red, and those are definitely horizontal orange tummy stripes; so this is not, as I immediately assumed from the ground skimming flight and vertical swoop up to perch on the street light, a Northern Harrier, and it's certainly not a Goshawk, so we're down to the Accipter dichotomy—Sharp-shinned or Cooper's? 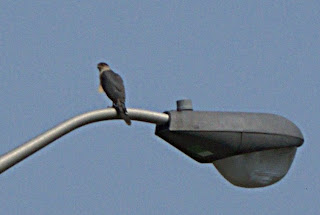 Slate grey back; this is an adult. (If it was a Northern Harrier, it'd also be male, but I don't think it's a harrier, so that's no help.) Also, that's looking like an instance of 'pale nape', a field mark for Cooper's. No obvious white tail tip, but moult hasn't happened yet so that's a wash; could be worn or never there, can't tell. Tail tip appears rounded, which would also support Cooper's, but see picture number four. 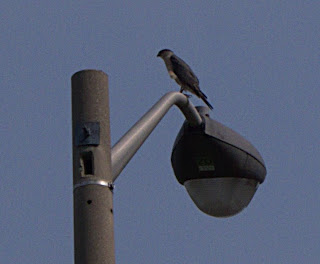 Tail much longer than primaries; definitely not a harrier. (Pout. Poor snap judgement, no biscuit.) and that's certainly looking like more pale nape. 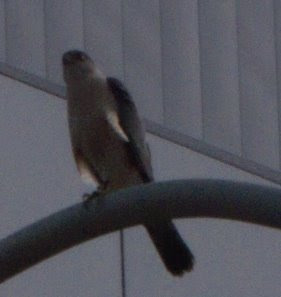 "Cooper's often perches on fence posts or poles" quoth Mr. Sibley, another supporting sort of character for Cooper's. Whether I should regard that as a more rounded tail, with graduated feather lengths, or a square tail with sharper corners, is not obvious to me. Since I already concluded that it could easily be worn, and it certainly looks worn, I don't think I can do anything with the tail as a field mark beyond 'accipter'.

So I'm tentatively thinking Cooper's but could easily be wrong.