The OFO had a field trip today, out Tommy Thompson Park (an artificial spit of land that sticks out into Lake Ontario to the east of the Toronto Harbour) for "late migrants, breeding birds & butterflies". It's wooded landfill, more or less, but landfill where thought and attention went into making sure it would be good diverse habitat, since the early (if not original) intention was to turn this necessary breakwater for the expansion of the Toronto Harbour sure to come with the completion of the St. Lawrence Seaway into a bit of urban wilderness. (The traffic to the Toronto Harbour has declined steadily since the Seaway was completed, back in 1953.)

I got to try out the new backpack, intended to permit me to transport a tripod for a spotting scope readily; it worked well (pack technology has seriously improved in the last five years) but my tendency to overpack mean that I just went for a nine hour walk carrying about fifteen kilos of stuff. Didn't need the lens bag; need to get a 'batteries, memory, and cleaning supplies' bag that is possessed of the minimalist volume nature, and not carry an extra five or so kilos of glass that I'm not going to use with me. Carrying a tripod and scope over one shoulder works, too, but I may want to invest in some padding for the shoulder.

The main problem, though, is that a modern pack transfers weight to the hips; the shoulder straps are there to keep the thing aligned with your body. When I raise binoculars to look at a bird, though, I find myself picking up the pack by the shoulder straps as well as raising the binoculars, which is more of a workout than my shrugging muscles perhaps deserve. This argues against back packs for birding supplies. It also, perhaps, argues against taking a camera; one either goes photographing birds, or birding, but not both at once, at least not without either a cart or a porter.

Aside from birds, we saw two beaver, turtles, and giant goldfish. There were some three butterflies as well, but I regret that I did not retain any of their names.

I am a complete sucker for goslings in the reminiscent-of-hadrosaurs stage, which makes photo choice easy: 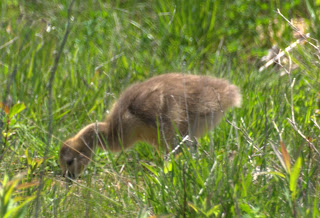