Seems like a good idea; I get to spend an order of magnitude less, practise taking pictures with a very small field of view, and possibly get a few pictures I would not otherwise have been able to obtain.
So I collected self, two sets of binoculars, Sibley Guide, foodstuff, water bottle, lunch, camera, lens bag, spotting scope, and tripod into a roughly luggable format—everything out of its normal containers and into a large day pack, except the tripod, which is awkward, spiky, and has a shoulder strap—and set off for the zoo, on the cheerful grounds that the waterfowl pond down in the Canadian Domain section must have thawed by now, and indeed ought to have one or more interesting birds.
Which it had, and which it did.
What was lacking was some specific functioning neurons on my part, because having got all that stuff in a heap and trotted off with it, I neglected to bring any additional SD cards, leaving me with the 2GB card in the camera and that's it.
With a Pentax K20D, shooting DNG raw files, 2 GB is 82 shots. [1]
I realized this at the zoo, after expending a couple-four of those 82 shots getting the camera settings back to normal from where they'd been doing the practise digiscoping out my window at an at least mostly immobile bit of maple-blossom. I did get a tolerable image of a feral daffodil out of it, but still.
So I was very, very careful. 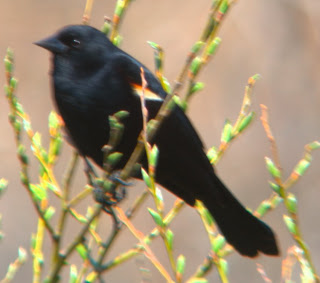 And, ok, you can tell what it is, and it was taken from something like twenty five meters away, and it was sitting on a high twig that was blowing back and forth in the breeze. And it is, unlike various ducks, and given those caveats, plausibly in focus.
But still. Not what one could describe as sharp.
On the plus side, there are some good regular photos; as a spotting scope the spotting scope works entirely fine; the 20x60 Pentax binoculars, picked up on something close to a whim, are just dandy for waterfowl in bright light; I saw some sunning turtles I would not have seen without at least one of the long binocs or the scope; there were soaring vultures, a harrier, and something that looked like a crow-sized duck with white cheeks.
And it got me outside, and somewhere quiet, so by no means a waste of time.

[1] Yes, I know, Whiskey-Foxtrot-Whiskey. For someone who never shot film, and who has been getting used to SD cards being the constraint, rather than the battery, for a couple years now, having enough battery for something like 1500 shots and enough SD card for 82 is decidedly annoying.