I find these guys challenging photographic subjects.
They're dark all over, except for the brilliant shoulder patches, which, this early in the spring, are brilliant indeed. So getting the creature evenly rendered in the image is hard.
They're also somewhat adverse to either sitting still or perching anywhere all that near people; cattail stalks out in the swamp are much better breeding territory, and while the males are somewhat indifferent to their surroundings this time of year, they're not indifferent to the whole better breeding territory thing, which tends to keep them chasing one another around the swamp rather than suspiciously withdrawing from the human presence. From a good photograph opportunity standpoint, it's much of a muchness. 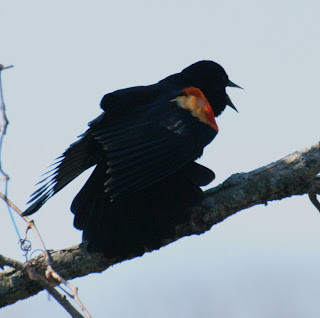 So we have the fellow above, trilling his heart out. 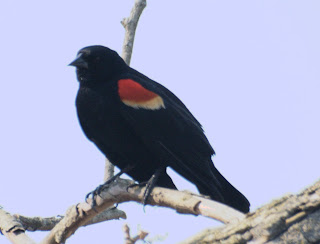 This one, looking dour and dubious and indeed he flew off half a second later. 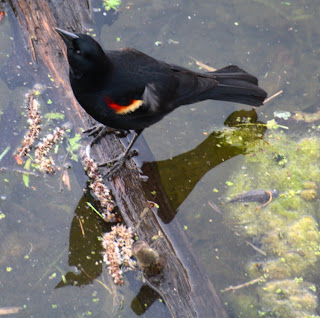 And this one, which came out fairly well, pond scum and all.