Pigeon From The Paint Factory 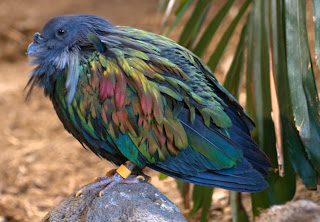 Actually a Nicobar pigeon, Caloenas nicobarica from the Africa Pavilion at the Metro Zoo.

First respectable picture of one I've managed to get; they're generally quite lacking in anything resembling shy, but they're also typically strutting briskly about below the foliage, where it is quite dim and hard to take pictures. This was a pleasant combination of a sunny day and spring, which makes the male of the species inclined to a certain amount of static display.

I don't imagine anyone at the Zoo is enameling pigeon toe claws, but will admit to a certain difficulty believing that colour is natural myself.